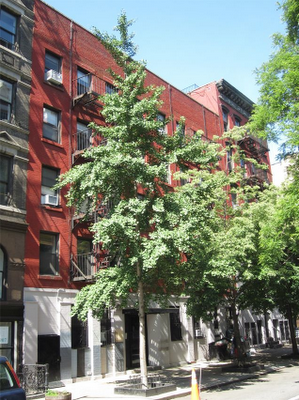 According to The Real Deal, Shaoul paid a combined total of $25.1 million for these seven properties in 2010 and 2011.

Its officially Dushner's world now, we're just living in it.

Hold on people. You are on your own. People in this area could give a rats ass about residents. Rosie Mendez will do nothing. Never has, never will do anything regarding this situation or any other situation in the East village. Sold her soul down the river. Don't be fooled.

Stick together, call DOB, HPD, file an HP action, form a tenants association, take matters into your own hands......

Shawn Chittle's comment on another Kushner thread was spot on. The NY State Attorney General should do a bribery investigation of the DOB immediately. You want to advance your political career, Mr. AG??

Can we get media attention like we did for No 7-11. This is pure monopolizing. It is like the New Yorker profile of Christine Quinn's bid for mayor. Vile.

I will volunteer to start a kickstarter for 10,000 stickers ASAP!

Kushner/Trump, your awful lecherous presence is absolutely NOT welcome in the east village!!!

You are scum - consider yourself on tocie to treat tenants RIGHT around here!!

Wow in 2 years a 25 million dollar set of properties went up to almost 50 million?