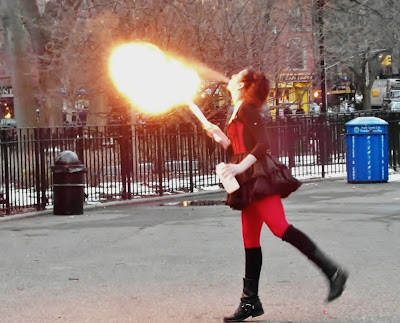 Last Wednesday, we posted photos that peter radley and Bobby Williams took of a woman breathing fire in Tompkins Square Park... turns out that this was Penny Pollak, the East Village-based (occasional fire-breathing) actress and writer who also hosts Penny's Open Mic Tuesday nights at Under St. Mark’s Theater.

We thought that this would be an opportune time to talk with Pollak, who also recently started a travelogue performance blog of sorts, about fire breathing. And other things.

How long have you been breathing fire (if that is the correct term for it)?
About 7 or 8 years ago a friend of mine mentioned he needed another firebreather to do gigs with, and having never even seen someone breathe fire, I obviously volunteered. He taught me how to do it and all of a sudden I’m hurling flames outside of dungeons-and-dragons events in rural Pennsylvania.

What were you rehearsing for this particularly afternoon?

I got a call from a casting director for a WWF commercial that morning asking me if I can actually breathe fire or is just on my resumé. I told him I could send him a video audition by that evening, so I grabbed some kerosene and a lighter then hit Tompkins Square Park. It’s been several years since I’ve done it but turns out it’s just like riding a bike… except with fire.

Several people sent me photos of the fire breathing that day in the Park. Did you feel as if you were receiving a lot of attention?

It’s funny, I didn’t really notice. But that’s the thing about the East Village — nothing seems out of place. A girl breathing fire in the Park is just another Tuesday in the neighborhood. Also I was just really concentrating on getting the biggest flames I could on film without setting my hair on fire. But now that I think about it, I should have put on a hat.

What is the secret to successful fire breathing?

Don’t set yourself on fire.

Penny’s Open Mic is now in its sixth year at Under St. Mark’s Theater. How have you seen this evening continue to evolve?

The great thing about the show is that it’s constantly evolving. Tons of new performers every week and really talented regulars are always there to grace the stage. It’s a wonderful mix of a little bit of everything. Being in a theater I think inspires people to be more theatrical and take bigger risks with their art. I love that every show I never know what to expect which keeps me on my toes and having fun.
Posted by Grieve at 6:30 AM

This is cool. But is it legal? I feel like she could have gotten in trouble doing that in the park.

love Penny. Her open mic is the best in town. great vibe.

Yes, it is illegal as she's setting a fire in a public park which is risky no matter how far away she is from trees, plants, shrubbery, grass, people, or whatever else, but she's a white hipster artist girl so she can get away with it.

If it was a non-white person - say a Latino from Alphabet City or a homeless black man - doing this, he'd be arrested, and spare me the bullshit that he wouldn't.

Btw wtf is so special about drinking kerosene then spitting it onto a flame to create a fire? She's a fireSPITTER.

I've seen Penny perform many times, and she's much more than a fire-breather. She's an amazing actress and a gifted, versatile performer.

"What is the secret to successful fire breathing?

Don’t set yourself on fire."

Look at EV Grieve not publishing my comments saying it is illegal for someone to create fire in a public park like this woman is doing.

I'm sure if it was a black homeless man he'd be reported as a crazy.

Keep up the censorship and spare me comments aren't a democracy.

andrew is jealous. interview makes her sound like a nice person trying to get a job. not someone out to flaunt the laws or whatever.

In fact as far as I can find firebreathing ISN'T illegal. http://www.nycgovparks.org/rules/section-1-05

"Unlawful Fires
No person shall kindle, build, maintain, or use a fire in any place, portable receptacle, or grill except in places provided by the Department and so designated by sign or by special permit. In no event shall open or ground camp fires be allowed in any park. Any fire authorized by this subdivision (m) shall be contained in a portable receptacle grill or other similar device, and continuously under the care and direction of a competent person over eighteen (18) years of age, from the time it is kindled until it is extinguished. No fire shall be within ten feet of any building, tree, or underbrush or beneath the branches of any tree.
No person shall leave, throw away or toss any lighted match, cigar, or cigarette, hot coals, or other flammable material within, on, near, or against any tree, building, structure, boat, vehicle or enclosure, or in any open area."

"Unlawful Fires
No person shall kindle, build, maintain, or use a fire in any place, portable receptacle, or grill except in places provided by the Department and so designated by sign or by special permit."

Where is the sign saying "Firebreathing Allowed" and Penny's permit to maintain or use a fire in Tompkins Square Park?

The middle part about the "campfire" which Penny's firebreathing could be construed as (as she could be considered setting up camp to do it)implies Penny must have a fire extinguisher for her firebreathing antics which she clearly does not have in the photos.

She seems neat. And funny. And talented. And I would rather see this happening in the neighborhood rather than herds of frat boys terrorizing the streets with drunk and disorderly conduct. I find the latter to be far more dangerous and disconcerting(and should be illegal).

She's doing something illegal and dangerous to human safety in the park.

If some papers blow by her, catch on fire, roll into some puddle of alcohol or other flammable liquid, boom - fire in TSP someone without a fire extinguisher set. What if a flame catches onto someone? Or everyone should steer clear of her which means the park is hers and hers alone when it isn't?

Another thing I don't like about it is everyone has to stay clear when they shouldn't have to. It's a public park for all not a private playground for one.

quit being such a killjoy bro

As a fire breather myself, one must understand the principles behind the action of incineration. The fuel ignites and immediately becomes consumed with heat and therefore diminishes the components that would allow it to have a continuous burning agent. So unless you have any idea of what is actually going on.... Just stop talking altogether...