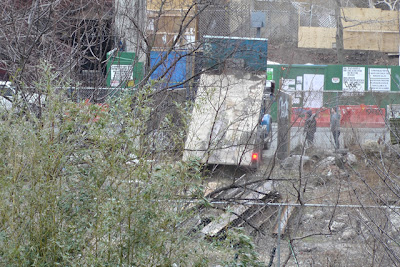 On Saturday, EVG regular Steven Matthews noted the arrival of some materials at 321 E. Third St. near Avenue D, one of those empty lots that we've been monitoring.

The space, long the subject of a tug-of-war between various factions, was officially sold last June to the vague 321 E. Third Street Realty LLC. And now we know what the plans are too: a 6-story, 30-unit apartment building. Permits were filed in December... and on Jan. 14, the city disapproved the first round of plans. Gerald J. Caliendo is listed at the architect of record. (No sign of renderings. We'd love to see them via email ...)

This is now the booming part of the neighborhood... Directly across the street at 316-318, a Karl Fischer-designed, 33-unit apartment building is in the works. And the 12-story Alphabet Plaza is going up on Avenue D at East Second Street/East Houston.

Who knows when and where it will end... 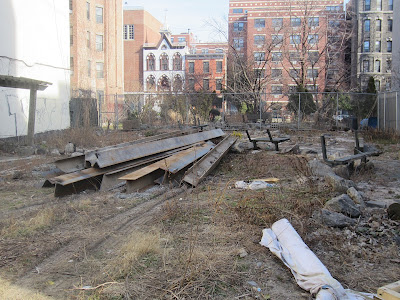 Previously on EV Grieve:
Another parcel of East Village land ready for development
Posted by Grieve at 6:31 AM

Supposedly these materials are for the 2nd St/Ave D site. That was according to the crew that dropped them here. I live next door and I'm not looking forward to the potential of two new buildings being constructed simultaneously right outside my window. I moved here to get away from the construction.