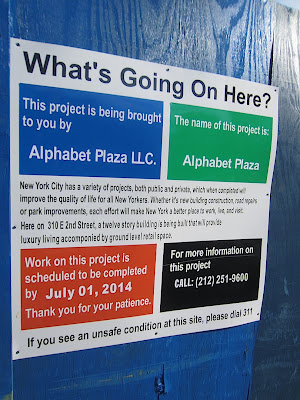 Crews arrived in late October to start work on the lot at East Houston and East Second Street/Avenue D.

In October, the city OK'd plans to erect an 12-story mixed-used apartment building for this space. According to the DOB, the building will be 108,953 total square feet, with 9,640 set aside for retail.

Per documents, Jerry Kahen of Alphabet Plaza LLC is listed as the managing partner. Avinash K. Malhotra Architects is the architect of record. The firm's projects include the W Downtown and 2 Gold Street. (And we're still waiting to see the renderings. Have you seen them? Let us know via email!)

As the "What's Going on Here?" sign shows, the projected is expected to be completed by July 1, 2014.

The project is well on its way, as these photos from EVG Facebook friend Edward Arrocha ... 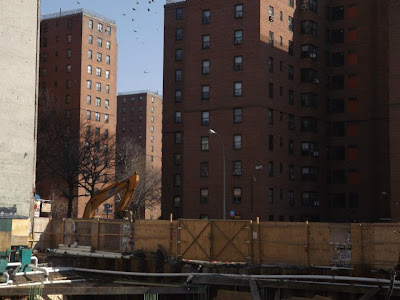 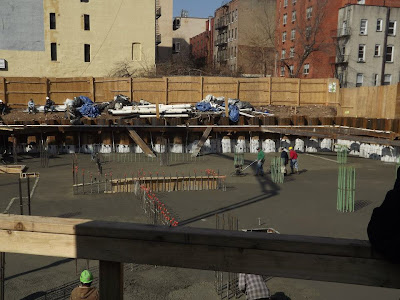 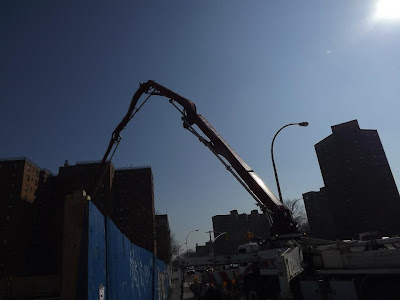 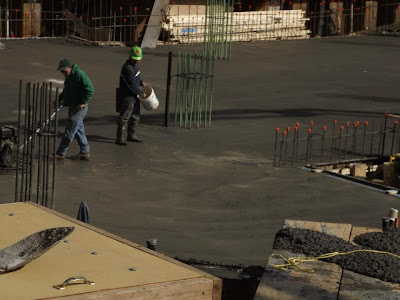 We'll leave you with a sentiment from Curbed's mention of this project last November: "Given Avenue D's proximity to the East River, hopefully Malhotra and team will make Alphabet Plaza better protected against flooding than 2 Gold."

Report: 12th-story 'Alphabet Plaza' in the works for Second Street and Avenue D

Alphabet Plaza ready to rise on Avenue D
Posted by Grieve at 6:29 AM

What? No mention of the bendy thing??? Yer slippin'.

they were working on this site @ 2am!?! in the morning sunday pouring concrete, what a sight to see, all lit up, I really wish I had my camara, wouldve made for some great shots - BL

Hope this is affordable housing, have been trying to find an affordable 2 bedroom for years now. Either I make to much for most Mitchel-llama's or not enough for NYC real estate. ugh!