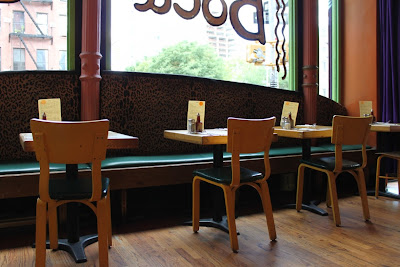 Rumors started spreading this afternoon that Boca Chica, the inexpensive Latin American restaurant on First Avenue at First Street, had closed as of yesterday. Earlier, we received an email from an EVG regular with the subject line "Boca Chica Dead."

However, this doesn't appear to be the case. Serena Solomon at DNAinfo reported that two partners abruptly exited the business yesterday, and the remaining owner was "frantically searching for new partners." The remaining partner was hopeful to continue operations.

The restaurant opened in March 1989.

That would be a big loss, I loved that place!

Bob Perl, Darin Rubell, David Rotter and the other partners probably have their eye on it!

That will be a shame. I remember when it opened and I was just there a few months ago and my initial reaction was " This place has not changed at all, Great!" Boca Chica replaced a old man bar that was called "First on First" Anybody remembers that place?

Headed to EV for Boca Chica tonight and was blown away to realize it was closed, apparently for two months, according to this blog. Hoping the owners find a way to reopen and retain the same atmosphere and menu.