Memory of terrible movie continues to haunt the Bowery 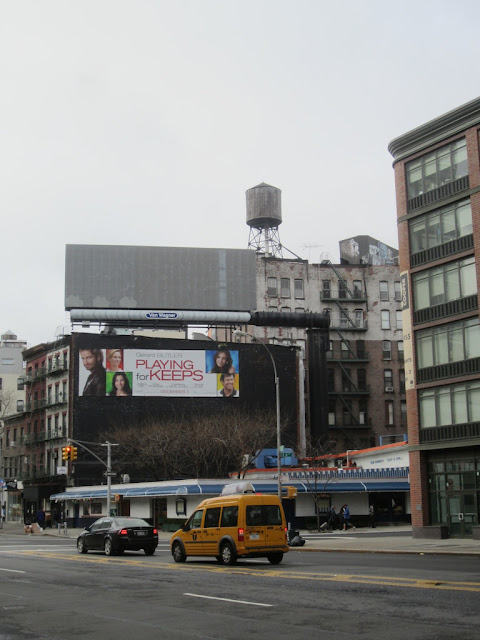 Tonight, as Hollywood honors the alleged best movies of 2012... a moment to note that the billboard for "Playing for Keeps" is still up on the Bowery at East Fourth Street. The movie opened Dec. 7. By now, it's likely playing on TNT. Despite an outpouring of 311 calls from distracted residents and motorists who complain of Gerard Butler's hair and what appear to be smiles from a denture commercial, the ad remains... 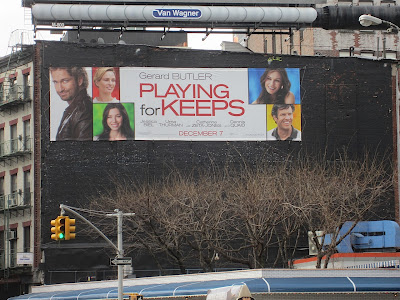 There's a 4 percent approval rating from critics at Rotten Tomatoes, who describe it this way: "Witless, unfocused, and arguably misogynistic, Playing for Keeps is a dispiriting, lowest-common-denominator Hollywood rom-com."
Posted by Grieve at 10:54 AM

Email ThisBlogThis!Share to TwitterShare to FacebookShare to Pinterest
Labels: bad movies, EV Grieve is high or something, the Bowery

Eh - in the mid-1980s on La Guardia Place, right off Washington Square Park, there was a large poster for Steven Spielberg's 1979 stinker, "1941". So for years after John Belushi died you could look up to see him scowling down at you. Sort of weird, but on the other hand it fit well into the surreal zeitgeist NYC had in those days.

Uma was in this movie. Everyone worships her for some reason. You must be mistaken. Uma wouldn't be part of this if it wasn't 100% admirable.