From hair salon to campaign headquarters 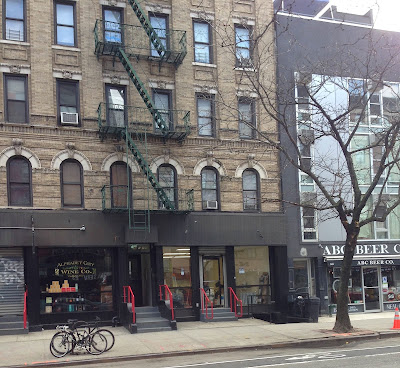 There has been some activity of late at the long-vacant former hair salon on Avenue C between East Sixth Street and East Seventh Street... right in between Alphabet City Wine Co. and ABC Beer Co.

Turns out the space will be the campaign headquarters for Rick Del Rio, a Democrat running for City Council against Rosie Mendez. You can read about him here.
Posted by Grieve at 5:30 AM

@ANon. 9:10 - Damn, honey, that is EXACTLY what I was going to type! Agreed, ANYBODY but Rosie! (Except maybe Margarita Lopez.)

Rosie is excellent, what's your gripe?

Maybe she didn't give sandwiches to the gangbangers?

"the police turned to Pastor Rick" - thats bragging rights sure

that fucking vandyke needs to go, i'd trust my landlord more than him

@Gojira
This whole thing with NYCHA is outrageous. Rosie has been unresponsive to residents regarding landlords and developers. We begged her for help. No staged protests. Nothing. With all of the illegal bullshit going on with developers and landlords she has done nothing. No help with DOB or anything. In addition she voted to support the NYU Expansion Plan. How much worse can it get around here? We need to shake things up. At this point if Mickey Mouse was running I'd probably vote for him. Anybody but Rosie or Margareta Lopez. Somebody is running against Chin as well.

Jimmy MacMillan & Reverend Billy will save us now!

The ironic thing here is we wouldn't even be having this discussion about Rosie vs. anbody but Rosie if term limits were in place. She and Chin acted all outraged when term limits were over-turned and now they can't wait to benefit from this change. Another irony is that Rosie is Margarita Lopez's hand-picked successor and is on the housing oversight committee of the City Council, yes the part of city government that is supposed to make sure NYCHA is doing what they are supposed to do. Well we all know how that worked out. Margarita and NYCHA do nothing for tenants and Rosie doesn't do anything until a scandal erupts. The last irony is the Post exposed the scandal.