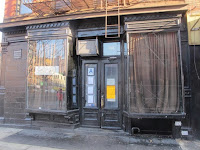 An EV Grieve reader in attendance at last night's full Community Board 3 meeting passed along this news item, noting that a shadow was cast over the potential sale of Lolita Bar on Broome Street to Marshall Stack bar owner Matthew Kelly.

Following the issuance of an NYPD restraining order on Feb. 14 for serving alcohol to minors, and a subsequent civil lawsuit against the bar by the City of New York, the full board voted last night to rescind the CB3/SLA committee's approval from Feb. 11 (which was conditioned upon a few trivial stipulations) of Kelly’s application for a full on-premise liquor license.

CB3 member Chad Marlow, who led the move against the bar, cited the high number of licensed establishments in close proximity. He also said that the community doesn't need, or will suffer from the elimination of, a bar that serves minors.

[Photo via BoweryBoogie]
Posted by Grieve at 1:51 PM

Upon dozens of visits to this establishment over the years, I've never seen anyone present who seems to be underage. I've had my ID checked every time. It's clearly an establishment that has aimed to operate legally, and it is in no way a nuisance to the community otherwise.

Marshall Stack, same thing, which is more relevant to this case. If the bar is being transferred away from a suspect owner to another local owner who's been nothing but responsible - one who is actually going to cease operating the current venue, change the name, renovate, etc. - that should be welcome and approved.

Holding or rescinding support for an ownership transfer when the new owner doesn't have any recent violations is just a move to make a symbolic point about the community board's power to interfere with irresponsible venue owners. Symbolically, it's vicious but effective. Logically, it's really really stupid.

This is why the SLA has a really hard time taking all of CB3's actions at face value.

I agree w Brian, these are actually two of the more legit bars in this area. Usually fairly civilized at both of them.

Matty is a personal friend of mine and this is a stupid response by SLA/CB3 (as I understand it). The former owners/ operators of Lolita's were irresponsible so the ownership shouldn't be transferred to a guy who runs the best place in the neighborhood and has never had issues with LE over serving minors?

He still has the one place. Let it go. Don't be greedy. Neither places are cool. According to who? This isn't the underground. You know what I'm saying. It's cool according to mainstream culture, which isn't really cool.

Both bars are very responsible. Why jeapordize the transfer when Lolita could eventually sell to someone who may not respect the neighborhood.

The community doesn't need any bars period! end of story! Close them all down start an online petition for midnight closings in nyc!

I love how most commenters in this blog only comments when there'a bar opening or closing. I guess their version of East Village is that of a bar district.

If Proletariat and Superdive did not pull a bait-and-switch, and Ariel Putz would not approve every establishment for applying for a liquor license, then this would not have happened. There are plenty of watering holes, upscale or otherwise, not only in the proximity of this bar, but the whole neighborhood. I don't get the outcry for bars that don't get a full liquor license. It's the dumbing down of the East Village.

Ariel should be kicked off the community board!