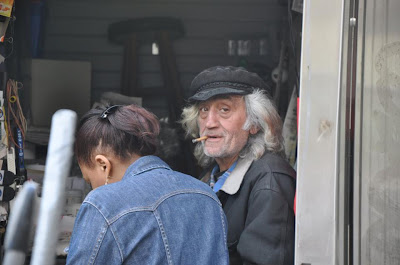 You know the story of Jerry Delakas, who has been running the newsstand at Astor Place since 1987. As the Daily News put it in April 2011: "The city is booting Jerry Delakas, 62, .... because he's not the legal license holder. That decision contradicts the dying wish of the woman who held the license, happily allowed him to operate the stand and designated him as heir."

In the eyes of the city, this is an illegal arrangement. Last fall, the city retained — for free — the services of powerhouse international law firm Proskauer Rose for the eviction process. Previously, the city used a Law Department attorney. "The lawyer handling the matter worked on it while part of the city’s Public Service Program for young attorneys before she left to go into private practice," a city spokesperson told the Post last September. "It made complete sense for her to continue on the case given that she’d worked on it since its inception."

Outraged neighbors say the chain-smoking character with a thick Greek accent and heart of gold has become a neighborhood institution. "Jerry's here rain, snow, sleet, blistering heat," said Larry Schulz, 68, who lives across the street. "He's just a real important part of our community. We think the world of him."

We haven't heard much since then about the situation. In the comments the other day, EVG reader BT mentioned that Delakas suffered a serious hand injury last fall.

Here's the latest on the situation with the city, based on information passed along by director Nicole Cimino at a Feb. 9 screening of "The Paperhouse Report," a 25-minute documentary about Delakas.

In short: He was denied his license again by the State courts. They granted him the right to remain at the newsstand until the end of this mayoral administration. He and his lawyer are planning on contacting the next mayor's administration to see if they have any desire to see Jerry keep his newsstand.

So Bloomberg is out at the end of the year... so you can expect to see Delakas here for perhaps the next 12 months at the very least... And he is on his third physical newsstand now... the one that he had starting in 1987 (his brother Aris is pictured in the photo directly below...) 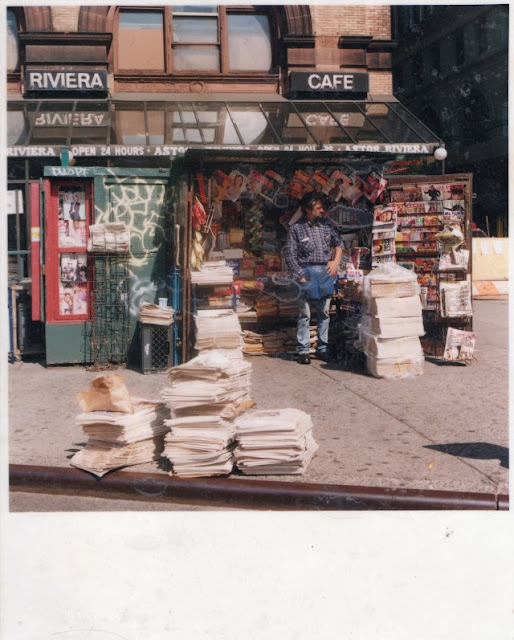 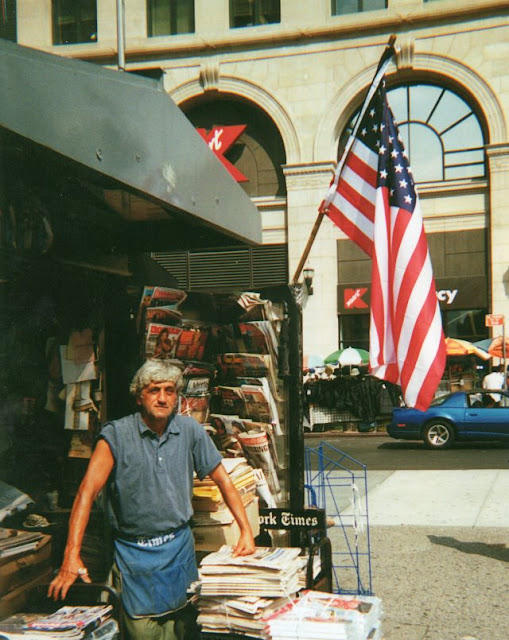 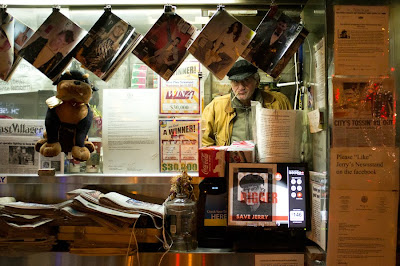 Read more about Jerry's situation at Jeremiah's Vanishing New York. You can watch the documentary at Vimeo here. Like Jerry's Newsstand on Facebook here.

[Archival newsstand photos via "The Paper House" website]
Posted by Grieve at 6:30 AM

All interested parties should bring this up with the mayoral candidates! The sooner the better! Put it out there.

Love seeing the Riviera in the background. Wow, that was the LasVegas of coffeeshops with all its lighting effects. I sure miss that place.

Riviera Cafe....I've been trying to remember the name of that place for years!!! I used to eat there with my friends after a late night of clubbing (I guess we were at the Pyramid Club or Danceteria or King Tut's Wah Wah Hut, hard to remember) and this was even before Jerry's newsstand was there. I hope he gets to stay there.
And thanks for making me feel ancient with this post.

1) Thanks for the informative reporting/article.

2) To be clear, I don't think the city is trying necessarily to evict Jerry. I suspect they just want to extort money from him in terms of a new "legit" license. I don't know this for a fact, but I'm pretty sure it's just about money. The thugs who run the city want "their" (our) money. In this case, they want it from Jerry.