Looking at the former Polonia space, soon to be home to David Bouhadana's sushi restaurant Dojo 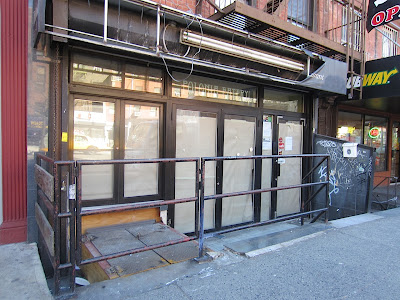 Just noting some recent activity at 110 First Avenue, former home of the dearly departed Polonia, the homey Polish diner that closed in December 2011.

As we noted last October, 25-year-old David Bouhadana, the onetime executive chef of the former Sushi Uo on Rivington Street, was looking to open a sushi restaurant here in the shadows of Subway's big new sign.

CB3 OK'd the liquor license in October... And Crain's reported last month that Bouhadana signed a 15-year lease to open what will be called Dojo... opening this spring...

Per the building's broker: "This is a continuance of strong chefs and entrepreneurial restaurant groups coming to the neighborhood. We've seen over the years just an influx of great concepts coming to the East Village."

Please distinguish it from DOJO, now gone, the East Village restaurant of St Marks Place, that still survives near NYU on mercer and w.3rd

My heart, and my money, are at Ginger across the street. I will give this place a shot, but Ginger's gonna be hard to beat.