Plans for fish and meat market, restaurant at 125 First Avenue on hold for now 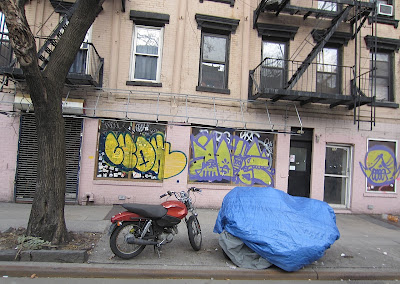 After reading our post Friday about the future of 100 Avenue A, a few people asked us what was going on with 125 First Ave. between East Seventh Street and St. Mark's Place. Previously, the space had been home to a hookah bar and before that Prana, the health food shop.

As you may recall, there were plans in January 2012 to open a fish/meat market-restaurant concept here. (Read our post on it here.) CB3 later OK'd a liquor license for the applicants, a group that included Ray LeMoine, an owner of the late Bowery Beef inside the Bowery Poetry Club.

Nothing much has happened to the space the past year, save the arrival of more stickers and graffiti. We asked LeMoine for an update.

"A piece of the financing fell apart but we'd still like to do the project," LeMoine said, adding that he has been focusing his attention of late on Heathers, the bar on East 13th Street that he and his partners took over last summer.

He also said that they would likely try something aside from the seafood concept. Recent seafood arrivals include Lobster Joint and Bait & Hook, among others ... not to mention Union Market...

Previously on EV Grieve:
Fish and meat market, restaurant in the works for First Avenue

I was told by a friend who had looked into taking the space that there will be major work needed to be done in order to correct the flooring in this space.

Wasn't that why they pushed out Prana, so they could fix the floor? I'm still pissed about that.

@nygrump: Yep the floor, but I do remember peaking into the space a little while after Prana closed and the floor was completely torn out. Maybe someone did a piss poor job.