Soon, we will all be writing our rent checks to Jared Kushner 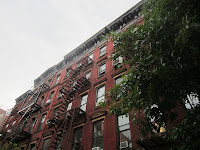 Jared Kushner isn't done yet shopping for buildings in the East Village. The Post reports today that the Kushner Companies, a major residential and commercial landlord, is in contract for two deals with Icon Realty Management's Terrence Lowenberg and Todd Cohen on a $28.8 million portfolio of 55 apartment and five retail properties.

As previously reported, Kushner bought 17 buildings with 267 apartments and 23 stores for $128 million. Plus! He is also in contract for a $49 million, six-building package from Magnum Real Estate/Meadow Partners.

When Hotel Toshi took over an East Village building

I left the east village because I saw this massive takeover coming from miles away.

My building was sold, and all of the market rate tenants were naturally kicked out for renovations. The prices they are charging now for our old apartment (and of course getting) are completely insane. There is a ton of profit potential in East Village walk-ups, so buying them up and renovating is the hottest trend in real estate.

I was afraid the same thing would happen again if I moved elsewhere in the neighborhood, which is why I left. If you are a market rate tenant who is paying a somewhat ok rate (and by that I mean something like 1800-2500 for an unrenovated 1 bedroom), you should start saving money for moving expenses just in case.

Honestly forming these super tenant associations and what not won't do anything unless you are rent regulated ot rent stabilized. Market rate tenants have 0 legal rights, and no one can do a thing about it.

Bloomberg is revising the City budget based on the fees incurred from all this real estate churn. But he will still give away the parking lots for luxury housing.

Thanks to all who continue to participate in the HOWL Festival!

HOWL 2013 - brought to you by Jared Kushner and Ivank Trump. I wonder which one of them will participate in the annual reading of Howl?

This is really scary. I can't believe one investor is allowed to even own this many rental properties in one neighborhood.

Honestly forming these super tenant associations and what not won't do anything unless you are rent regulated or rent stabilized.

This is absolutely true. Which is important to remember every time a landlord, management company rep or broker gets on one of these threads to rail against rent regulation.

Like a balloon which gets to much air the EV real estate gold rush will go pop someday. How much can you charge for a 6 story walk up (renovated) yet still a tenement apartment before renters wise up and go elsewhere? Right now I think we are watching a pissing contest between a few ego driven landlords who are building mansions on the low end part (Baltic Avenue) of the Monopoly board.

No sorry, the plan is to convert the Lower Eastside and the East Village into an upscale neighborhood. The dormitory housing is a tactic to make money and push out the rent stabalized tenants. This could take years. In many of these buildings there are only a handfull of rent stabalized tenants left. The end goal is to convert the buildings into luxury housing, either by gutting them and adding elevators, or by just completely demolishing them and putting up multi million dollar glass houses. Rich people really get off on living next to poor people. The people in the middle are almost all gone. 30 percent left. Don't tell me Kushner is doing this just to manage dormitory housing.

I don't agree with some of the assessments about tearing down the buildings as a strategy. These buildings are cash flow cows that provide a steady stream of money to fund new development. If this was all he owned it would be suspicious but they own a wide variety of property types. Diversification makes sense. (I hope I'm right!)