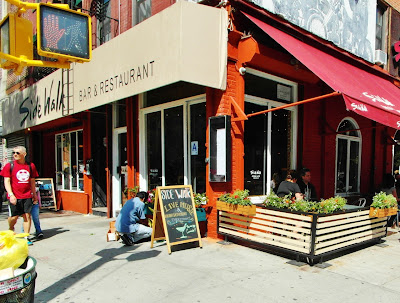 To mark 20 years of live music at Manhattan’s Sidewalk Café, the East Village landmark will present Sidewalk LIVE, 20th Anniversary, a year-long celebration of special initiatives ... Sidewalk will kick off the festivities with the Winter 2013 edition of the bi-annual Antifolk Festival, Feb. 19 to 28.

The ten-day Winter Antifolk Festival launch of Sidewalk LIVE will feature some 80 artists (schedule follows) representing the entire span of Sidewalk’s remarkable music timeline, including those whose careers were launched there, singer-songwriters such as: Jeffrey Lewis (performing with legendary musician Peter Stampfel of the Holy Modal Rounders and the Fugs): Jason Trachtenburg; and Seth Faergolzia of Dufus (performing with John Ludington).

The Winter Antifolk Festival will take place Feb. 19 – 28 with more than 80 free evening concerts over the ten-day period at SideWalk Café, 94 Avenue A (at 6th).

For more information and schedule details of the Winter Antifolk Festival and Sidewalk LIVE, go here. You can watch a live stream of each night's show here.
Posted by Grieve at 6:09 AM

Love you Sidewalk!
Congrats & WELL DONE!
Here's to the next twenty.
; )

We'll be Streaming each night live at the link below: https://www.gander.tv/event/sidewalk-cafe-winter-antifolk-festival-part-1-219-6pm-12am