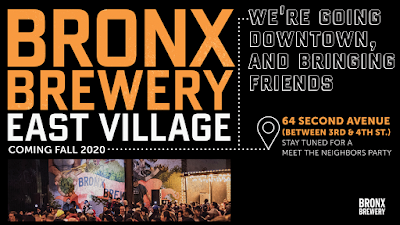 The Bronx Brewery is headed to the East Village.

Yesterday, ownership announced its expansions plans with a two-level outpost opening this fall at 64 Second Ave. between Third Street and Fourth Street... 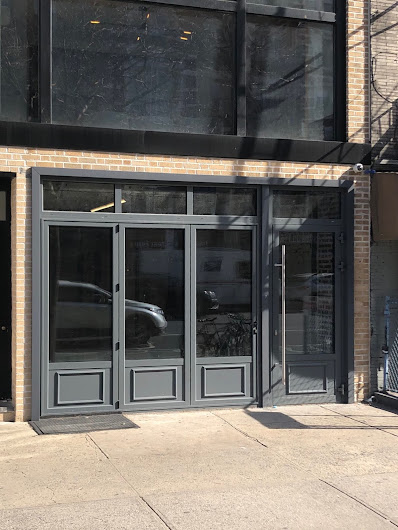 Some details about the new Bronx Brewery East Village via their announcement:

The Bronx Brewery East Village will combine limited-release brewing, the brewery’s signature events, art & music from rising stars across NYC, and a special guest in the kitchen.

The space will bring the brewery’s goal of building community through a diverse, creative and inclusive environment to an iconic neighborhood long known for its creative energy.

The Bronx Brewery East Village will be designed as a communal space, no matter the time of day. From brunch to a beer with friends to a night of live DJs, its multilevel layout – including immersive seating in the pilot brewhouse – will feature a variety of ways to engage with the space.

Murals and revolving street art will cover the walls and hi-fi sound will saturate the space, creating a showcase for New York City’s top up-and-coming artists, DJ’s and live acts.

The space will also give the brewery another vehicle to give back to the local community, with the limited-release brew series set to be used as a recurring fundraising platform for community organizations in the South Bronx and East Village. Earlier this year, the Brewery supported Puerto Rico relief efforts in collaboration with Bronx performer Richie ‘Crazy Legs’ Colon, while the Brewery will continue to open its doors as a venue for charitable causes.

They opened the Taproom, Brewery and Backyard in the South Bronx nine years ago.

The Bronx Brewery team is planning a Meet the Neighbors party in the space before construction begins this spring. No word on a date just yet.

God help the poor people who live in the apartments above this monstrosity.

How is it possible they can get a liqour license in an over-saturated neighborhood?

I like Bronx Brewery, and I think a member of the rock Steady Crew will lend a bit of NYC cred to those tourists dropping in for a pint, but the 'hifi sound will saturate the space' and the 'live DJs' nights sounds like a scary proposition. If anyone goes to the meet and greet, let them know that people live in the neighborhood.

I've been to the Bronx Brewery and it's fantastic. The folks who run it built a business from scratch and I'm happy they're coming to the EV. Those of you who don't like it, get over yourselves. And no I didn't just move here and no, I'm not a millennial.

Anonymous 1:22: maybe you need to get over yourself - its OUR neighborhood, if carpetbaggers want to come down here and take advantage of what we've built and sell drugs we can have a say in it. Alcohol is a drug and the layer of vomit I see every Sunday morning is proof it has very negative results for the people who live here. But transient boozers don't care about that.

This place is going to kickass here, so happy they are coming to the east village. If you don't like it, maybe you should move to the suburbs. Suck it!

3/12/20 @ 9:25 PM - Just maybe, you, and others of a like (non)mind are so damn beer-crazy, you should have STAYED in the suburbs, and not invaded our slightly more creative 'hood?

How was this place passed by the community board? I must have missed the notice that a double decker nightclub was opening in our residential neighborhood.

This is amazing! Can’t wait for this to open

How long before they add themselves to the list of SantaCon establishments?

This applicant hasn't appeared yet before Community Board 3.

It pretty much doesn’t matter what CB3 (or the community) thinks about licensing this place. They’ll just go directly to the State Liquor Authority and ignore the community.