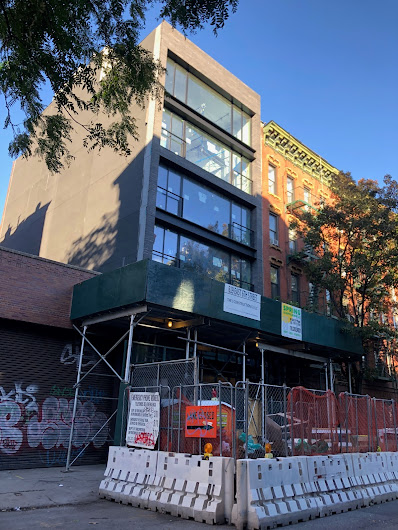 Last week workers finally removed the scaffolding and construction netting from 619 E. Sixth St., where a 6-story residence has been in the works these past four-plus years here between Avenue B and Avenue C.
As a reminder of what's in the works via DXA Studio Architecture, the architects of record: 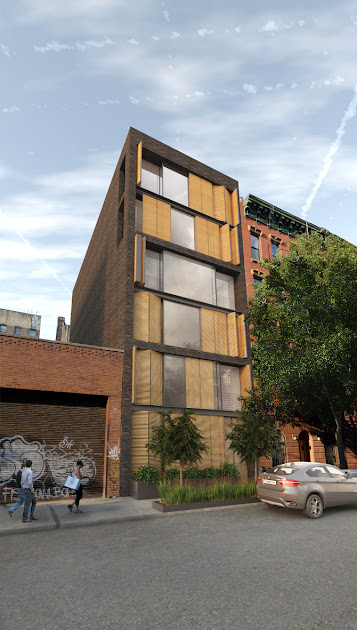 We first heard about this project in January 2016. It has seemingly taken a long time to knock down the previous one-level structure on the property and get to this point.
Residents on the block had previously expressed their annoyance by the roadway dividers and temporary walkway, which became a popular spot to use as a toilet.
Previously on EV Grieve:• 6-story condoplex, complete with Danish handmade brick, coming to East 6th Street
Posted by Grieve at 5:00 AM

The post- postmodern buildings are getting uglier and uglier; this one looks as though the architect got bored and gave up.

It looks boarded up already lol.

Take it from someone who lives next door to this and has since it started. There is no end in sight. We have been told for months “weather permitting we will be taking the scaffolding down the first week of...(insert the month)” The latest promise was taking down the scaffolding in the back of the building, because yes, we are completely blocked in, was supposed to come down by the 7th because they asked people to move their bikes. NO OnE moved their bikes because they knew it wasn’t coming down anytime soon. So don’t let them fool you. This little project won’t be done anytime soon.