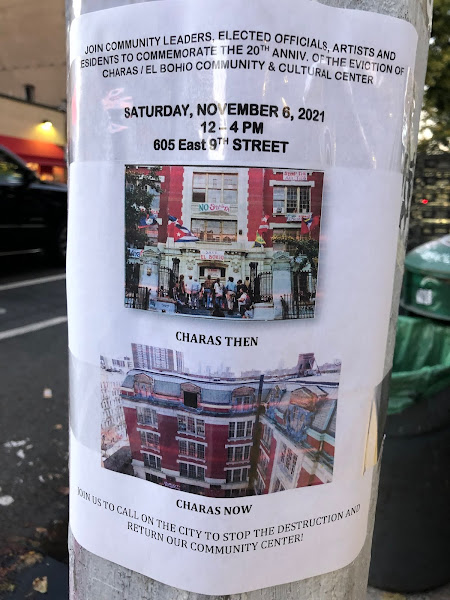 A group of community leaders, local elected officials and residents will gather tomorrow (Saturday) to commemorate the 20th anniversary of the eviction of the Charas/El Bohio Community & Cultural Center.
We've written a lot about what has (and mostly HAS NOT) transpired here through the years here at 605 E. Ninth St. between Avenue B and Avenue C. (The commemoration looks to be happening on the 10th Street side of the building starting at 12:30.)
Here's a recap via the office of District 2 City Councilmember Carlina Rivera:

Lower East Side elected officials, residents, and artists rally to commemorate the 20th Anniversary of the eviction of Charas/El Bohio Community & Cultural Center to call on the City to take action to immediately stop the destruction of the building.
For over 20 years, Charas/El Bohio Community & Cultural Center provided arts, community and nonprofit space for the Lower East Side and greater New York City area. Mayor Rudy Giuliani auctioned the city-owned building in 1998. Developer Gregg Singer purchased the building and evicted the center on Dec. 27, 2001.
Two decades later, the building remains vacant and has been allowed to deteriorate to the extent the Department of Buildings issued a Full Vacant Order in 2019 for failure to maintain the property.
The owner Gregg Singer has taken no significant steps to repair the damage, stabilize the building, or restore the facade, and is currently in foreclosure by mortgagor Madison Capital Realty.
Mayor Bill de Blasio stated at a Town Hall on Oct. 12, 2017, that the city would take steps to reacquire the building. The administration has yet to act, despite follow-up inquiries from the community coalition and its elected officials. Community activists and elected officials alike call on the City once again to take steps to save this local treasure.
The rally will kick off hours of street performances by local artists, poets and musicians that showcase our decades-long efforts to return this once-vibrant center to the community.

As previously reported, Singer has wanted to turn the building into a dorm called University Square. The DOB continues to maintain a Stop Work Order — dating to August 2015 — on the property.
In years past, several local elected officials, community activists and residents have asked for the return of the building for community use. The building became the Charas/El Bohio Community & Cultural Center after the school left in 1977. The group was eventually evicted when Singer took over as the landlord. It has sat empty these past 20 years, causing locals to be concerned about its crumbling façade, among other issues.
This link features Singer's POV on what has transpired with the building.
Previously on EV Grieve:
• A walk around inside the long-abandoned — and ghoulishly beautiful — P.S. 64 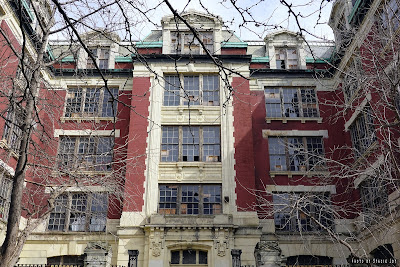 Photo from March by Stacie Joy
Posted by Grieve at 5:10 AM

Are we sure that the administration is yet to act, or rather if they simply wanted to avoid signing a massive check to this complete asshole? Strikes me as between a rock and a hard place. Obviously, this is a tragedy for the community. But I'm not one for signing rewards to people who take the community hostage, either. Singer man wants an ungodly sum of money and doesn't deserve a penny. Part of me enjoys seeing him look like a fool, as opposed to making millions. Short of eminent domain, which I doubt would succeed, and would still mean market rate land value, I don't really know the most practical way forward here.

Anyone hope that Adams might take this building back? Others have *said* they would do so, but so far it's all talk, no action.

I always believed that if Armando Perez had not been murdered this whole story would have turned out completely different. I know he had stated that he was going to fight and I believe he would have and the neighborhood would have backed him up !!! Armando Perez Presente !!!

"Mayor Bill de Blasio stated at a Town Hall on Oct. 12, 2017, that the city would take steps to reacquire the building." - Oh now, wait, give the man a chance, he still has two months left in his mayoralty! (ROFL.)