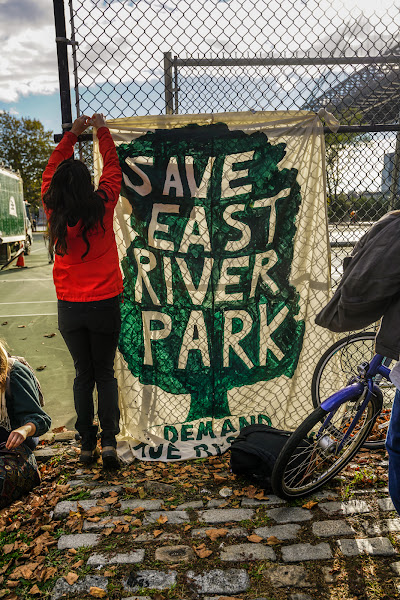 Appellate court judge Judith Gische heard arguments from Arthur Schwartz and Kathryn Freed, attorneys for East River Park Action, who requested the TRO.
The City's lawyer argued that the city was only doing preparatory work, and would not impose "irreparable harm" … until Thanksgiving.
The judge decided that because park users were already excluded from the tennis courts, she would grant the TRO and cause all work to cease pending further expedited hearings on our Parkland Alienation appeal.
The City has until [noon today] to file a reply, and our attorneys have until Monday at 10 to reply to the reply. The hearing should be in the afternoon. Stay tuned!
One notable thing was that the judge did, at one point, refer to the "formidable appeal." Kudos to our pro bono attorney wizards.

Right now in East River Park work has stopped because the community has fought back pic.twitter.com/rgdScRMGNQ

East River Park Action and opponents of this version of the reconstruction project continue to speak out, stressing there's a better path forward to protect the Lower East Side and surrounding neighborhoods from a 100-year-flood event and sea-level rise — one that doesn't cause 1,000 mature trees to be chopped down.
"Phased work operations" began on Monday below Houston Street at the Brian Watkins Tennis Center. According to the construction notice, four tennis courts on the north side and the tennis center will remain open through the end of the 2021 permit season on Nov. 21. All tennis courts and the tennis center including restrooms will be closed until 2024 — subject to change, per the city.
Two activists were arrested on Monday at the site for not heeding freshly posted "no trespassing" signs at the tennis courts. 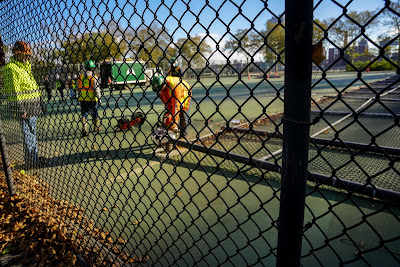 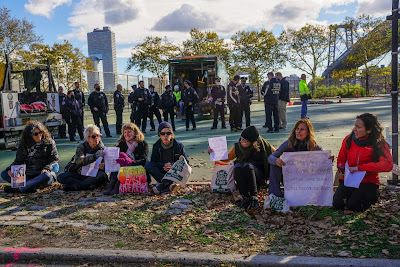 Opponents of this plan were at the site all week, drawing a huge police presence on Monday... 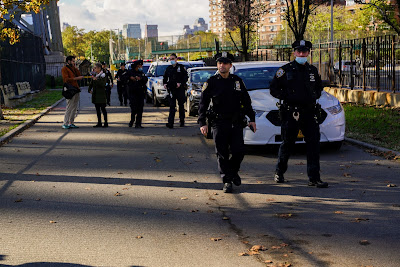 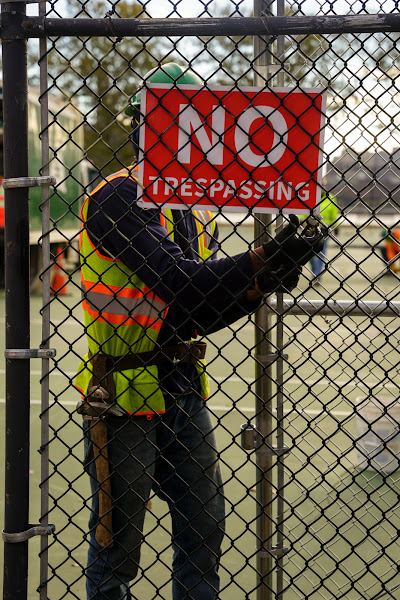 CBS 2 and The Village Sun also have coverage.
Posted by Grieve at 9:33 AM

This is it. This is how a four year project becomes an eight year project with more pain for everyone and twice the expense. It begins.

Still a long shot. Jack Lester, also hired by the ERPA, was supposed to explore the NYS Park angle whereby this plan needed NYS approval to go forward. Not sure whether that legal strategy is still being pursued. I fear the worst. So much $ behind this plan. The vast majority of the NYC CC, BdB (lame duck but still a potent force for evil), REBNY and the construction unions are all behind this CF of plan versus the other plan that had years of community involvement. And Adams is a REBNY kind of guy. Big time. Don't look for any help there.

This is such a huge disaster. I am happy this has been halted, but like other commenters, I also fear the worst. Who knows how long this judge can prevent this from moving forward? I am sickened this is our new reality. We know whom to thank in our city council and government who facilitated this self-serving, career bolstering measure. Four years my ass when this is complete. Let's say another decade and billions of more dollars. After all, it's only money and thousands of trees obliterated not to mention no literal breathing space for east village residents to have or retreat to. Forget about the wildlife. None of it matters but potential real estate development and commerce under the guide of supposed flood protection. Ever visit Amsterdam or the rest of the Netherlands? They're below sea level. They're not demolishing their cities and towns such as what we are going to do to here in lower Manhattan. Such a dirty shame what is happening to our lovely park in real time.

Mayor Elect Adams should jump in and stop this corrupt boondoggle.

East River Park trees survived Hurricane Sandy, act as windbreakers, keep us shaded and cool in the summer, their roots absorb storm water and they're absorbing carbon dioxide protecting our health.
They are not sick.

A small section of the park was recently upgraded. It was expected to take only 2 or 3 years but it took 10, that area of East River Park is set to be demolished for the current plan.

NIMBY refers to something that could be in a different neighborhood but you don't want it in your neighborhood. This isn't about building a development, this is about taking away a 57 acre public park space for at least a decade, destroying 1,000 (1/2 the mature trees on the LES) that clean our air and making that decision unilaterally without community input.
If asphalt is in need of repair or maintenance, ok.
But 57 acres of our public space being taken away for at least 10 years is tragic and without those nearly 1,000 mature trees (half the trees on the lower east side) we can count on an increase in asthma rates.

When It Comes to the Climate, Older Trees Do It Betterhttps://science.time.com/2014/01/15/study-shows-older-trees-absorb-more-carbon/

Why doesn’t the city just build a wall along the FDR, as per the original plan?

Excellent news on a wise decision! Please let us know what we can do at this point to support the park and those defending it!

GREAT news! If we can hold off the destruction until de Blasio is gone, hopefully Adams will keep the park intact.

AND think of all the $$$$ that would be saved by leaving the park intact!

Let me simplify for those haters. This is nothing but a LAND GRAB for private real estate.

For those that want a wall, please understand that this is the current plan, to add many feet of height to the park. But first they must destroy everything in order to make The Wall.

This WALL plan has been criticized because there are other ways that have been determined to be more effective with dealing with flooding AND the reports have been redacted so we don't know what giveaways are going to private developers.

These stoppages are not frivolous. Think about how Rivera, The Mayor, Brannan and Powers do not want transparency for destruction going forth. There will be things that stop ANY project, the politicians want to hide this from you. It is an absolute SHAME that Harvey Epstein will not commit to transparency on this because - we can only assume - he fears retribution by local community groups who are backing Rivera and this disaster. She is running for Speaker and we must do everything we must do everything we can to stop this from happening.

For those that remember the NYS Senate group the IDC - voted into office as DEMS but voted as the GOP when called on in Albany - Carlina Rivera is a wolf in sheeps' clothing. She tells you she cares, then votes away public lands for real estate development.

Don't say we didn't warn ya.

From East River Park Action site:
"Please join in monitoring construction (DESTRUCTION) in East River Park weekdays 7AM – 3PM. Take photos and video of the work you see. Our lawsuit is on appeal and there are other suits too. You can help."

"Contact City Officials - Right now, we are asking City Council Members (CCMs) to hold a hearing on the viability of the East Side Coastal Resiliency plan that will destroy East River Park. Alternatives are possible."
"Join the fight. Write to us to join our email list, ask questions, or send ideas."
OurPark@EastRiverParkAction.org
Tag @ERPAction on Twitter and #EastRiverParkWatch
http://eastriverparkaction.org/actions-now/

Last week the Appellate Division heard oral argument on East River Park Action v. City of New York (2021-00421). The appeal seeks state legislative approval of the seawall, arguing that the resliency plan is not connected to park purposes.
The judges who spoke seemed to accept the premise that the city has to destroy the park to save it. They did not ask probing questions about the plan or possible alternatives. Any dissenters were very quiet.
You can watch it on youtube.

If it was a four year project we would have already been in year 3 of it. This is a project by NYC DDC. The same agency that fixed Houston Street in 15 years (also a 4 year project).

Why is East River Park being destroyed?
Hurricane Sandy affected Battery Park City, The Rockaways, Brooklyn... The city isn't razing any parks there, why only here?
Why is the city taking away a park along low income NYCHA buildings?

"Access to clean air and outdoor activities seems like a basic right. But in cities across the country, lower-income communities and communities of color more often live in neighborhoods with a higher share of concrete surfaces such as roads, buildings and parking lots, and a very limited number of trees and parks."

In fairness, many many many trees did not survive Sandy and were removed. Trees don’t do well with salt water

The nearly 1,000 trees at East River Park are healthy.

Why is East River Park being destroyed?
Hurricane Sandy affected Battery Park City, The Rockaways, Brooklyn... The city isn't razing any parks there, why only here?
Why is the city taking away a park along low income NYCHA buildings?

I think we all know the answer: because the wealthy have their trees—Central Park, anyone?—but the poor can live with their asthma inhalers. (If you have the right insurance plan, you can even get them replaced for free—or almost free.)

I am livid about this, because I live 2 blocks from East River Park, and I was below Canal Street shortly after 9/11 and for almost a year; I need those trees to breathe.

The city is even claiming that the saplings that replace the mature trees will be more effective at cleaning the air, and we all know that's a load of crap.

Hard no. This is how a community struggles against a brutal wrong being committed against it, and against the city as a whole.

If the city announced a plan to chop down 1000 trees in Riverside park—it wouldn’t last a week after community outrage and backtracking.

Albany and City Hall; come up with a better plan... that's what you're getting paid to do.

https://zuzannna.github.io/Healthy-Trees/
"Dead trees have a smaller diameter than alive ones! ...it could mean, for example, that freshly planted trees which have a small diameter are in highest risk. This makes more sense when we look at the rightmost figure - it turns out that trees labeled in “good” health have also higher diameter."

The city is going to replace the large diameter healthy trees with small ones? Those that are at high risk of dying?

"In fairness, many many many trees did not survive Sandy and were removed. Trees don’t do well with salt water"

This is frigging lie. Your lie was already posted here on another previous East River Park thread and it was debunked. As you are.

i'm not sure i follow the argument that this is some kind of "REBNY land grab"? this is mapped as park land, how could there be real estate development there?

"i'm not sure i follow the argument that this is some kind of "REBNY land grab"? this is mapped as park land, how could there be real estate development there?"

Ummmm because of the various NYCHA projects on Ave C and Ave D that FRONT the East River Park whose residents are POC? Try to keep up.