Classic Odessa Restaurant signage gone for now on Avenue A; 'It's in a safe place' 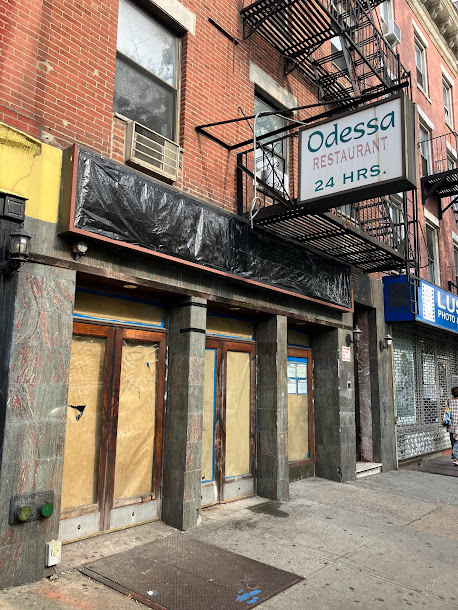 Several readers noted over the weekend that the classic Odessa Restaurant signage — • Seafood • Steaks • Chops • Cocktails — has been removed (or covered!) at 117 Avenue A between Seventh Street and St. Mark's Place.
As you probably know, Superiority Burger is moving into the space... with an anticipated opening one of these days.
Brooks Headley, owner of the all-vegetarian quick-serve spot that was on Ninth Street, told Grub Street in August 2021 how much he loved Odessa's interior. "I find it completely beautiful — the soda counter, the satellite bar, the cash register station. I don't plan to change it at all."
We asked SB what became of the old sign. Perhaps it will be refurbished and returned? (After all, the Seafood and Steaks lettering was peeling off.) The response via Instagram: "Don't worry. It's in a safe place!"
Odessa Restaurant opened in this space in April 1995 before a July 2020 closure. The original Odessa, the longtime favorite that dated to the mid-1960s, closed next door at 115 Avenue in August 2013.
Posted by Grieve at 4:50 AM

The only question now is which opening will take longer, the new Superiority Burger or Wegmans supermarket on Astor Place? See you in 2023!

Are you talking about Superiority Burger?? That can’t be farther from the truth. most of their menu is vegetables and beans, seasonal, and sourced from local farmers at the green market.

Just eat your salad at home then

I used to work for original owner (Harry) in 1977 - 1978 as a waitress...than became an owner of Stage Restaurant...History repeat itself...what's happening to East Village? Hard to believe!

I loved Stage, but Teresa’s on First avenue was my fave polish restaurant

Why, what's the problem here? No one was eating at Odessa anymore, even pre pandemic.

why the hate? What would you rather see in this space? vape shop? Bar? You don’t have to eat there but I personally can’t be happier that an independently owned restaurant with good food is moving in. you’ve clearly never been there if you call this “salad.”

Happy to welcome them! Odessa was done

Superiority Burger is definitely a great establishment. And much more in tune with the times than Odessa.

7:08 You've missed the point, that was directed at "Overpriced, over-processed faux diner cuisine". That why it was a reply, not a comment on its own.

Teresa's was the best. I even went there while strolling brooklyn heights. Pity it's gone there as well.

It's funny how news being recycled in the blog universe. Within a matter of hours the sign is now being called "iconic" on another publication.

That’s ridiculous, it was often busy and served a real community purpose in a way that I really doubt superiority burger will.

All about The Kiev, KK's then Neptune.

You're always on point Giovanni!! -IzF

Change is not always for the better. This is def not better & I’m Vegan. Don’t care for Superiority Berger.

superiority is a good, healthy, independent restaurant that was successful enough to grow. not everything in this neighborhood has to cater to every person.

Odessa was neighborhood friendly & affordable to working class families. Superiority is neither of those; it’s expensive & snobby. No thanks