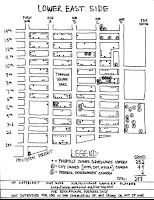 The Times has a nice piece today on the East Village Trivia Night held at the Bowery Poetry Club this past Tuesday. As the paper reports:

“Who was born there? Who died there? Who was shot there?” said the organizer of the event, Eric Ferrara. “We’re interested in everything that’s notable and not so notable.”

“I use East Village professionally because it is what people know today,” Mr. Ferrara said. “But with family and comrades we still call it the Lower East Side.”

Ferrara grew up on Suffolk Street and is a fourth-generation Lower East Sider. He and some like-minded residents started the East Village History Project in 2001. (Their mission: raise the public's awareness of the East Village/Lower East Side's historic significance and influence in world history.)

The article ends on a rather sad note...it's a shame that a lifelong resident and passionate advocate for the area has to now live elsewhere...

Mr. Ferrara said that he does not reflexively oppose gentrification, but lamented that he had recently moved across the East River to Brooklyn after being evicted from a rent-stabilized apartment on East Third Street.

“I can’t even afford to live in my own neighborhood anymore,” he said.

I left the neighborhood in 1998 when I had a stroke, had been living there since the '50s when we came to America. Went to school there, fell in and out of love there and thought, 'I certainly will croak here'.

Even when I traveled around the world or cross country my Lower East Side apartment was always in my family and I always came back to it...the rent was always so ridiculously low.

But since I've been away for over a decade, still recuperating from the stroke, I know I wouldn't really recognize it, the area would be so different, the stores and buildings, the people would be vastly changed...

Grieve, how many years do you think you have left there? Hope that it lasts very long...but I have my doubts.

I'm not sure how much longer that I have left in the neighborhood...I have no plans to leave anytime soon...I have a humane landlord...and I still love living here (despite my grumblings!). So that's a good combination.

I can't remember when I first heard the term 'East Village' but it had to be sometime in the '80s. I always thought of it as the Lower East Side but when the artists started moving in when it was primarily a Puerto Rican neighborhood, East Village became the label. And consequently, people now call the actual Village the West Village the actual Village, which seems even more recent. This past weekend I saw an official holiday sign recognizing Noho as an actual place and welcoming me to it. Names change, neighborhoods change, time marches on, I feel old. Or, to quote the Butthole Surfers, "God Dog Sex Death Life Now I'm Feeling Old."