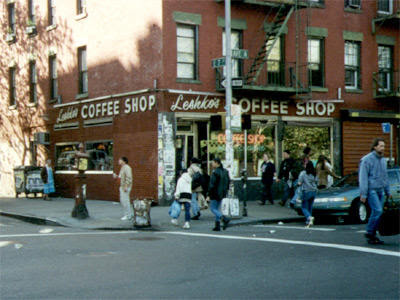 [Updated: Sorry, I missed doing this earlier. Bob Arihood's words and photos are always compelling at Neither More Nor Less. Check out some of his shots that include Leshko's.]

There's a photo of the late lamented Leshko's (not that one above us) on the corner of Avenue A and Seventh Street in my post on the film What About Me from earlier today. Anywho, I was trying to remember when the original Leshko's closed. (1999.) So I did a little research. Just wanted a share a few passages from articles I found on the place. And I am not being fucking nostalgic, OK! I swear! I love the Yuck Cafe that's there now! Uh, Yeti Cafe, sorry! Er, Yuca.

As more and more Slavs move out of the East Village, their presence is being felt less and less. Two major landmarks recently disappeared: Leshko's and Kiev.

Of course, both are still standing. It's just that both have been renovated, reimagined and reopened, losing much (if not all) of their Ukrainian flavor along the way.

First to go was Leshko's (111 Avenue A at 7th Street), which opened in 1957. New owners closed down the old-school favorite in 1999 and turned it into something that ended up in an issue of Wallpaper* not long after. The menu lost almost all of its Slavic dishes, with the exception of pierogies. But they were reworked almost beyond recognition - mushroom and leek pierogies?

For decades, Leshko's has held down a corner near Tompkins Square Park in what was once called the Pirogi Belt, in deference to the neighborhood's Slavic population. Aside from providing early-morning and late-night sustenance to the local clubbing crowd, Leshko's served Ukrainian staples like cabbage soup, boiled beef and the occasional special of jellied pigs' feet.

The Leshko family sold the restaurant in the 1970's, though, and it began to decline, becoming grungier and less and less inviting. Its site, at Avenue A and Seventh Street, is heavily trafficked, and one can easily imagine the new owners selling out to, say, the Gap or Starbucks, one further step in homogenizing the East Village. The owners did, in fact, want to sell the restaurant, but the Leshko family still owned the building, and any new tenant required its approval. The family preferred to maintain the site as a restaurant.

Meanwhile, two business partners who wanted to open a restaurant, Robert Pontarelli and Stephen Heighton, finding that Leshko's was for sale, decided to pursue it. They met with Jerry Leshko, a son of the original owners, who is an art history professor at Smith College, and hit it off. Leshko's was theirs.

From here the corner became the Yuca Cafe. Saw Sam Shepard eating there once.

Updated: Sorry, I missed doing this earlier. Bob Arihood's words and photos are always compelling at Neither More Nor Less. Check out some of his shots that include Leshko's.
Posted by Grieve at 2:09 PM

Thanks for the update. I used to work at Leshkos when I first moved to New york in 1981.

I'm late, like 10 years late, but still......I grew up at Leshko's. And later on, as a struggling post-student, it sustained me, sometimes 3 meals a day, every day. Nothing was better than a Leshkp's Combo plate: a decent sized chunk of kielbasa, pierogies, a boiled potato, and mild kapusta(sauerkraut). The grunginess and slashed seats were part of the charm. I will always miss Leshko's. I have no interest in some Yck Cafe, or Yucca Flats, or whatever. Feh!

Lived on 12th between A & B in '83-'84. Leshko's was one of the remaining monuments to to East Village polish community before it got gentrified. In the winter the glass would be fogged over from the steam tables. It was the real deal.

I worked as a teacher on East 6th Street in the mid 1980's. Leshko's was a favorite lunch spot, as well as
Kiev. Loved the grittiness, the old East Village unique vibe. Was a privilege to work in the neighborhood!

There was another place on 12th and 1st I think called K and K anyone remember it ?

I was there in the 80’s. Was a great place to go after 10th street baths. Cheese Pirogis, borscht and a beer 5 bucks