Thanksgiving at the Aqueduct, Part 2

On Thanksgiving, we headed out to South Ozone Park, Queens, home to the Aqueduct Racetrack, conveniently located by the long-term parking at JFK. Just a short 2-3 hour A train ride away! Actually, I think it's just 21 stops away from where we live in the neighborhood. So, fuck yeah — we called Delancey Car Service to get us there. High rollers! Post time was 11:25 a.m., an hour earlier than usual for the fall meet, which ends on Dec. 31.

Oh, the real fun begins in January with winter racing. You'll know who the diehards are then. As Mark Jacobson wrote in a Feb. 22, 1999, Aqueduct feature for New York magazine:

It is unlikely that the seventeenth-century English aristocracy had Aqueduct winter racing in mind when they imported those three Arabian, Turk, and Barb stallions -- stock from which all Thoroughbreds are said to be descended. Begun in the mid-1970s to keep gambling tax dollars pumping year-round, winter racing has long provided a handy metaphor for the 50-odd-year decline of the erstwhile Sport of Kings. Indeed, with its slew of six-furlong races, its bowls of clamless clam chowder ladled out from steaming steel vats, and the same daily "faces" -- Rastas, Chinese waiters, Korean War vets on disability, etc. -- serial plunging at the $2-exacta windows, Aqueduct seems a perfect spot to divest one last grubstake before tottering off this mortal coil.

Yeah, well, that's the thing that has always struck me about Aqueduct: So many of the regulars there do seem to be merely killing time before dying. It's like a well of loneliness, even among like-minded individuals there intent on betting and drinking. 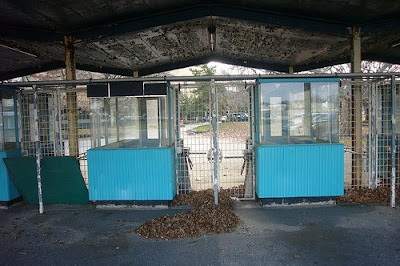 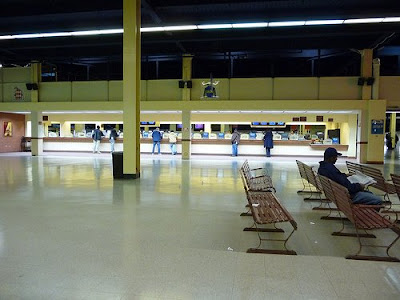 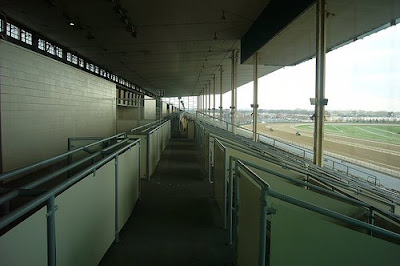 Anyway, back to Thanksgiving. It was suitably depressing, made even more so by the presence of holiday decorations that brought no warmth to the cavernous space. At least they're trying. 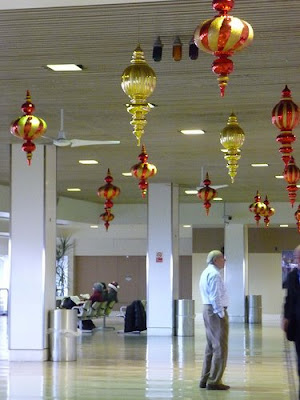 There was actually a fair number of families at the track. That's part of the idea of an early post on the holiday. Come out, watch some races, and leave by 3 p.m. for home and turkey and stuff. And get everyone out of the house while the real work gets done.

For food at the track, there's a Nathan's Famous and Sbarro. Not to mention the Hello Deli. There's a cafetria in the Man 'O War Room. And the Big A grill in the second floor clubhouse. 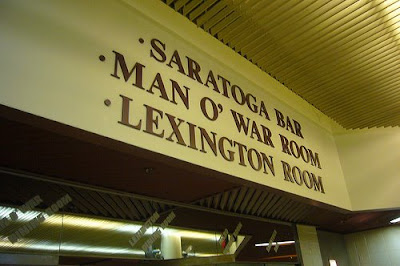 But! For some old-school charm, you have to visit the Equestris, the white-tablecloth restaurant that offers panoramic views of the track. You can buy six beers at a time. They'll put them in a bucket with ice. The betting windows aren't too far away. (But don't stay up here too long — the real action is downstairs alongside the track.)

I appreciate the air of sophistication put on by the tux-clad, well-coiffed maître d' and bell captain. They make you feel as if you're at 21. Given the rather seedy clientele downstairs, the desciption of the Equestris on the Aqueduct Web site is particularly hilarious:

Elegant Attire has long been a Tradition at Aqueduct Racetrack. Ladies and Gentlemen who honor this tradition are always appreciated.
Recommended Attire: Elegant
Gentlemen should wear suits or sport jackets (no shorts or abbreviated wear); Ladies should wear dresses, skirts or pantsuits.
Acceptable Attire: Business Casual
Management reserves the right to use its discretion to determine acceptable attire. Gentlemen: Collared shirts required. Suits or sports jackets optional. No shorts or abbreviated wear.

The track holds 40,000 specators. On Thanksgiving, they drew 3,200. So there were definitely places where it seemed like it was a little full. 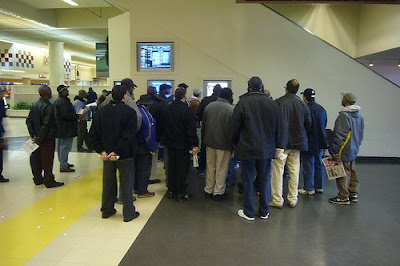 I love the barber shop at the track. Wasn't a lot going on Thanksgiving, though. In fact, I stopped by three different times. The door was open, but the barber wasn't around. Not that I really wanted a haircut. I just like the idea of it. I got my hair cut there once. It's $7. Despite his grandfatherly appearance, the barber was rather miserable and in no mood for track history chitchat. He scolded me a few times. And he smelled like talcum powder. My hair is simple to cut. Yet he still made me look like Fred Gwynne. Fred Gwynne as Herman Munster. 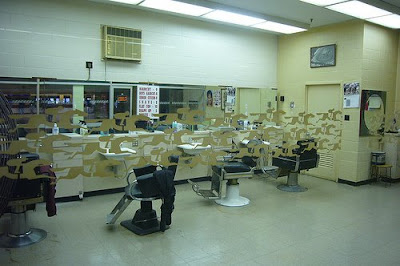 Topeka John always says to bet on horses with Cat in their name. (I forget why — I just do it.) 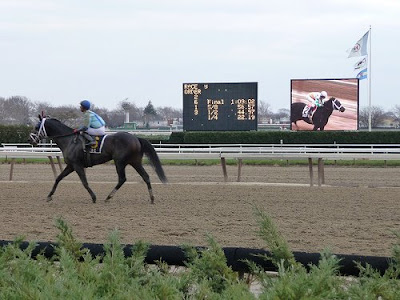 As I noted yesterday, Aqueduct is becoming a racino, a racetrack that will include a casino (slots only), conference center and big hotel. It promises to be fancy — a business destination for yuk-yuk doofsters in pleated khakis in town for business. This place will never be the same. I understand the need to generate revenue, etc., etc. — just don't have to be happy about it.

Sorry, but I have to quote that Joe Bob Briggs article one more time:

Aqueduct is the kind of urban race track that doesn't really exist anymore in the rest of the country. 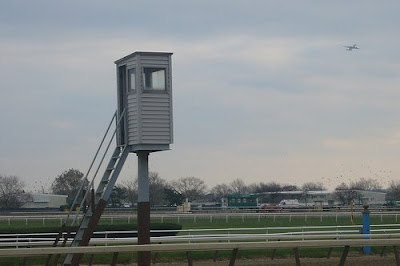 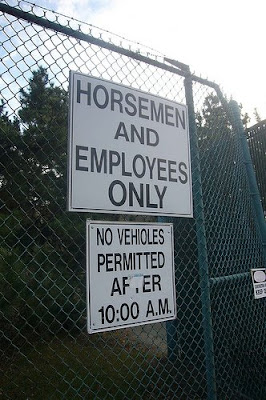 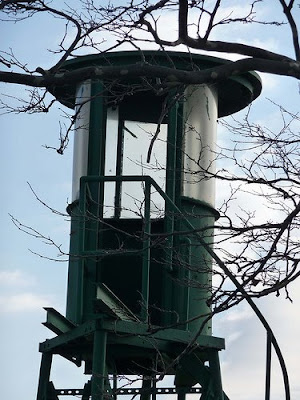 some lovely, melancholy pics you've got there

Thanks...and only 88 photos to choose from! Looking back, I wish I had taken shots of the maître d' and bell captain. Or the man carving turkey. He was so pleased with the Thanksgiving buffet. "It's good, yes?" It was, actually.

Your description that they are waiting around to die might be correct. But I have a couple of senior friends (Philly and Jimmy DiCiccio, who for 30 years ran a butcher's shop in what is now 12 Chairs on MacDougal) who head out there every Thursday. I think its what keeps them alive! They love it, they know all the horses, they drag their geezer buddies, It's a full on party!

Oh, yeah...that description isn't for everyone... There are lots of folks there enjoying themselves... I guess I always gravitate toward the most desperate-looking souls.

Kudos Grieve, one of the most interesting NYC destinations for Thanksgiving I have heard yet. A true "Restaurant-Quality" post.
I kept getting this vision of outtakes from Broadway Danny Rose that were filmed there but never seen.

This is a bit of a tradition for us... been there on Thanksgiving maybe 3-4 times now.

Wow, what a great tradition. I am so jealous of your thanksgiving. I wonder if I could get my mother to forgo cooking Thanksgiving and go to Aqueduct instead. I don't think it would be a hard sell, given the hard core gambler that she is.

On a summer weekend Belmont has been continually lacking crowds. Horse racing just isn't what it used to be. Even all the OTBs are shutting down. Belmont has a similar feeling to Aqueduct in its run-downedness but has the honor of hosting the Belmont Stakes, which I've been to twice. At double the normal price it's not worth it. But I do enjoy wearing a nice big hat for a special occasion. I love making my $2 bets, shouting and shouting for my horse to go go go go go.

Once I interviewed for a job at Belmont but after 3 interviews I didn't get it. Shortly after that everybody was fired in some kind of swindling scandal.

What was most shocking to me recently is that making your bet is now via machine, no human interaction at all. I always liked chatting with the cashier and asking for their help on how those complicated bets work. I play one trifecta each time. I tried something more complicated once but I didn't understand what I did or what it would have taken for me to win. It was like playing a slot machine.

My grandfather taught me how to weave the program into the slotted seats to save your spot while you placed your bet, and to stand on your seat and shout at your horse or else it surely wouldn't win.

My grandmother would pack a picnic lunch, and slip me five dollars when she was winning, whispering that I shouldn't tell grandpa because he'd get mad.

Thanks for the comment...I love the stories about your grandparents at the track.

Belmont is still on the classy side. Well, for the most part, anyway. I've never actually been to the Belmont Stakes -- figured it would be too much of a mob scene. Have you been up to Saratoga during the season?

A friend and I used to visit Aqueduct on Sundays in the early 80's. I loved the touts and the bitter, bitter coffee. We used to see none other than the great Cab Calloway going in and out of the vip lounge and he always had a smile for everyone. We always could recognize the same people because they wore the exact same loud smelly unclean clothing and stood in the exact same spots every time we went to the track. I loved getting betting tips from total nutjob strangers. I loved standing inline with all the colorful characters. I loved the shabbily attired old gents. I loved watching entire families of loonies yowling out whatever they felt was necessary to their horses. What a total riot.

Excellent! Thanks for sharing... The people still yowl at the horses -- and jockeys.