As you probably know, the Aqueduct Racetrack in South Ozone Park, Queens, will become a racino, an entertainment megaplex that will include a casino (slots only), conference center and huge-ass hotel. It's one of those phased-in projects that should take forever to complete. Groundbreaking is expected in early 2009.

Well, as you can see from the Aqueduct parking lot Thanksgiving morning, there's plenty of room for such things. 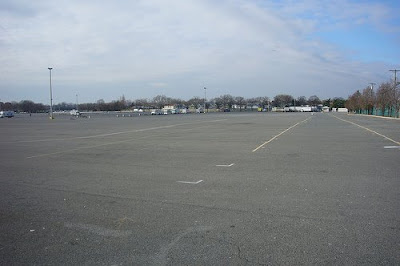 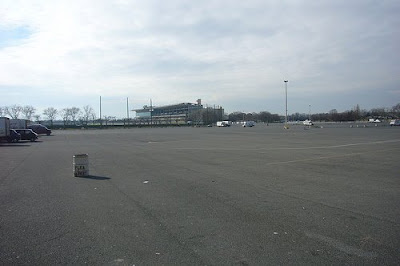 So all that will become this:

I imagine the junky, three-times-weekly flea market held in this space will have to find a new home. 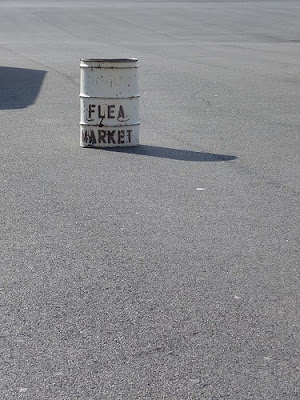 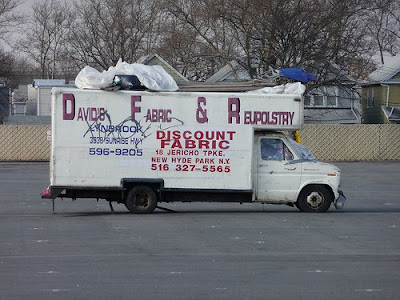 By the way, if you find youself at the rather lonely front gate on Rockaway Boulevard, treat yourself and take the free shuttle bus to the racetrack entrance. 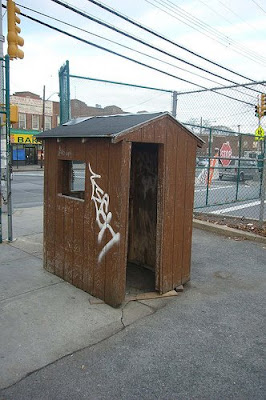 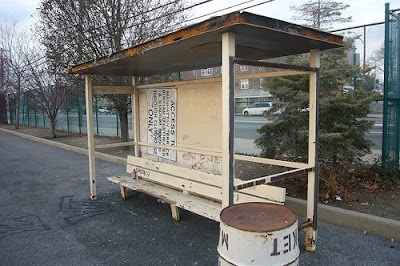 Nothing like reliving painful memories from elementary school before drinking and gambling! 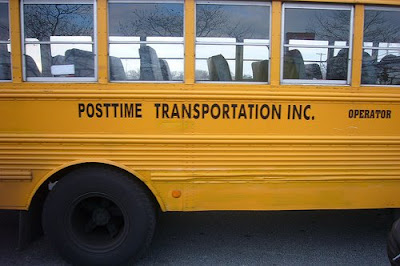 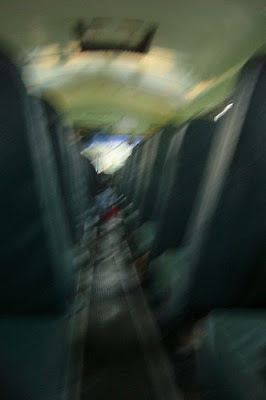 I hope to get back out there before the construction begins, closing a seedy era that I so enjoyed. 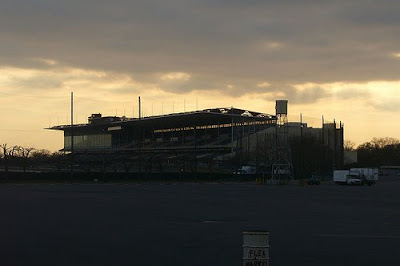 NY politicos have been kicking around the idea of adding slots here for years. In the fall of 2001, Joe Bob Briggs wrote a column on the Aqueduct and remarked on the potential for slots:

It's hard to believe that the New York tracks haunted by the Vanderbilts and Whitneys and Morrises and Du Ponts would resort to slot machines to keep up with the times. Aqueduct, after all, is where Man o' War ran his most famous race, defeating John P. Grier in the Dwyer Stakes in 1920. When the new track opened in 1959, Bill Shoemaker rode both winners of the first Daily Double, and Eddie Arcaro won the first turf race. It's the track of Kelso, the only five-time Horse of the Year, from 1960 to 1964. And Aqueduct is steeped in lore that would only be known to horse people--for example, the race in 1944 that was the first, last and only triple dead heat in a stakes race (Brownie, Bossuet and Wait a Bit in the Carter Handicap). Buckpasser won 12 of his 17 races at Aqueduct. It was the track where Steve Cauthen won 23 races in a single week and where Angel Cordero won two straight Eclipse Awards.

Previous attempts at turning racetracks into gambling/entertainment meccas haven't go so well. As Ray Kerrison noted in the Post Saturday:

Magna Entertainment Corp., Frank Stronach's public racing arm, which bought a flock of tracks and set out to transform the game with bold new ideas, only to stumble into an ocean of red ink.

Stronach bought Gulfstream Park for $95 million, spent $130 million to renovate it - and essentially ruined it as a horse venue. Magna has lost $400 million in the past four years through similar erratic, scatter-shot planning and management. It is now fighting for survival.

I'll spare you the boohooing about the end of this track as we know it. I'll end with another graph from Briggs:

The winter season at Aqueduct is not really for tourists or day-trippers. Of the three great New York tracks -- Belmont, Saratoga and Aqueduct --Aqueduct is the least glamorous. It's a working man's track, the only track in America that has its own subway stop. In fact, you can stand on the subway side of the clubhouse and see the skyscrapers of Wall Street in the distance. Aqueduct is the kind of urban race track that doesn't really exist anymore in the rest of the country.

I'll write more later on the rest of Thanksgiving Day at the racetrack.
Posted by Grieve at 7:01 AM

I know I'm going to sound like someone posting on "Curbed", but if there is less demand to see horse racing in the NYC area, to the point where two tracks can't be profitable, does Aqueduct have to be turned into another entertainment complex? Why not raze the track and put in residential housing, of which we have a shortage? I realize its historic but probably not historic enough to warrant preservation in horse racing continues its decline.

I guess the state sees the potential for profit at Aqueduct. Developer Delaware North gave the state $370 million in advance for its license to operate there. According to the Times on Oct. 23, "the state expects to reap more than $10.3 billion in revenue from the gambling terminals over the next 30 years."

There will be 4,500 gambling terminals in total at Aqueduct.

According to the Times, the project is also expected to create 2,000 jobs in Queens -- nearly half will be permanent once the casino is open....the other half are construction jobs.