CB3 to explore bar-related noise issues on Avenue A?

As you may know, two new bars opened this summer on Avenue A between 12th Street and 13th Street. We haven't talked much about Destination, now at the corner of 13th and A in the former Boysroom space. Mostly because we don't know much about it. So we looked it up. Here's a description from Grub Sreet:

Destination has what one of the operators (they include owners of Paladar and Iggy’s Karaoke Bar) has already deemed a “make-out corner,” and there are Jell-O shots with gummy tequila worms and whiskey-infused Rice Krispie treats.

The double whammy of Destination and Superdive (both taking over spaces that have been empty for more than a year, if not longer in the case of the Boysroom) are apparently creating quality-of-life issues for residents. Based on these fliers someone distributed on Avenue A, it looks as if the CB3 is ready to listen. 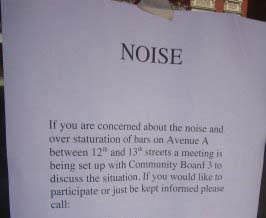 There is a phone number on the flier. I'll pass it along if you'd like it.

Jeremiah has the following photo today... "NO MORE LIQUOR LICENSES." 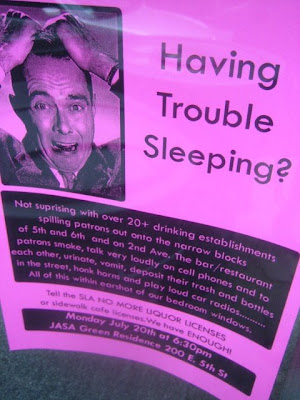 Gummy worms and rice crispy treats...now I know where to go for my afternoon snack.

i can hear screaming all weekend nights long, until like 6am, when my windows are open. but i just feel like there is no way anything will happen if these places are making money. which they are. face it, we live on a campus now.