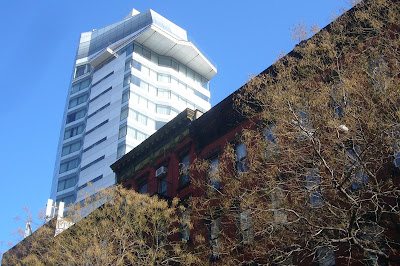 In the Times today. From Frank Bruni's review of Table 8 at the Cooper Square Hotel:

It’s the Cooper Square Hotel, a whimsical glass sliver that doesn’t just stick out among the nearby tenements but more or less taunts them, declaring them holdovers from a frumpier East Village past. The hotel tries to claim the neighborhood around it as a party zone on a homogenously slick, glossy par with South Beach or West Hollywood.

Not all the neighbors are amused. Some have responded to the din of chatter and generic lounge music coming from the hotel’s second-floor terrace by hanging dirty briefs and the like from a clothesline readily visible to the revelers. It’s a campaign of undermining by underwear.

I spotted only one sad, fluttering garment on the evening when I ate on Table 8’s street-level patio. And it did less to ruffle my serenity — the patio is a pretty, breezy treat — than the door that crashed into the back of my chair when someone decided to step outside. Placing a table for diners smack in the door’s way exemplifies the curious planning at which Table 8 excels.

And the sound level inside Table 8? "absolutely bonkers" and "excruciating."

And make sure to read the part about the wine in the restrooms.
Posted by Grieve at 6:49 AM