Scott Stringer: Enough with the ATMs! 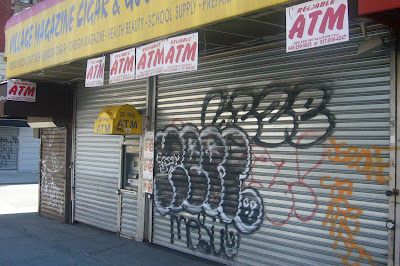 The Daily News had this story yesterday:

Those grubby, no-name ATMs are multiplying like bunnies, and Manhattan Borough President Scott Stringer says they're not only a nuisance -- they could be unsafe.

Stringer's office surveyed 950 Manhattan automatic teller machines and found that some neighborhoods -- like the East Village -- have a disproportionate number.

"It's time for the city to step up and call a halt on these attempts to cash in on our neighborhoods," Stringer said of the machines, which stores install for a fee.

In the East Village, surveyors found nearly 100 on the sidewalk, five of which were on one Avenue A block. Only two in the area were affiliated with major banks.

Just last week, EV Grieve reader Jen pointed out the three newish ATMs along First Avenue between Seventh Street and St. Mark's. She (correctly!) calls them hideous and asks, "Why the sudden influx? They're practically all touching."

I have my theories...feel free to leave your own. 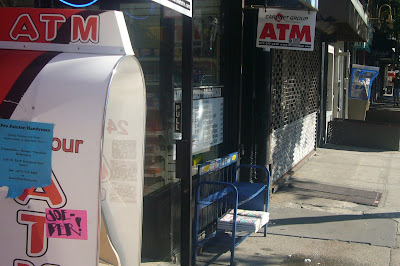 Previously on EV Grieve:
Avenue ATM (aka, how many stupid ATMs does one block need?)
Posted by Grieve at 6:40 AM

you have your theories? the only theory is it's a fool-proof way to make more money for the business. they are ugly and annoying.

You pay to get your own money, what a concept.

in the LES, more and more are popping up.

Makes it easier for people to spend more money at bars too. Like the bars that have the ATMs right at the front door.

anon-2:28 - this comment is just idiotic so, other than to say that, i won't address it.

the street ATMS do make it "easier" for people to spend money anywhere, definitely including bars. i cannot tell you how many times people find out the place i work at is "cash only" and totally freak out because they don't have 8 dollars on them. thus ensues the "where's the closest ATM?" "across the street" "well, that's too far away" conversation.

the atms also give a percentage of "service fee" to the business/building/etc that "leases" them.

while overly ubiquitous and hideous, i have to say i use them all the time - or did when i used a bank.

I don't see why this is an issue. Ugly and annoying? - so are most of the people walking around this neighborhood and they won't go away either. At least they don't stand on the corner and scream into cell phones or at each other at 3am (yet). These machines are pretty small and don't block the sidewalk, and if someone can earn a living off chumps who pay money to get their money, then god bless america.