Baraza has closed. I walked by the Latin-themed joint on Avenue C between Eighth Street and Ninth Street last night. The door was open. The space had been gutted. 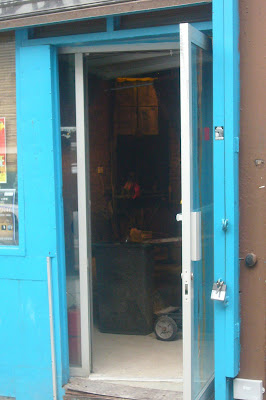 There's no note to patrons on the door ... and the Baraza Web site makes no mention of closing. However, Baraza's MySpace page confirms that the bar closed.

It opened in 1998. I've never been there... So I looked to see what I had missed via Yelp. Where I found this review:

If you go dancing without first putting on deoderant, I will go on Yelp and write about how everyone in the club smells like ass , and how fair is that to the club, really? I mean it's not like Baraza washed the deoderant off all these dudes as they were coming in the front door...at least, I don't think.

Let me explain something. There are a few things that I do without fail when I go out dancing. Actually, scratch that. When I leave the house. I brush my teeth. I put on clothes. I put on deoderant. Why, patrons of Baraza, do you not do the same? I was lucky enough to receive several offers to Latin dance throughout my evening there and it was good to know that I didn't need the cash-only bar to end the night passed out, since I was sure to pass out on the stench of body odor alone coming off my potential suitors. If you see someone tackling dudes as they come inside and rubbing them down with speedstick, that might be me. Watch out. Or wear deoderant. Your choice.

Email ThisBlogThis!Share to TwitterShare to FacebookShare to Pinterest
Labels: Avenue C, Baraza, bars that I've never been to, East Village

I don't even remember this place. Dancing-sounds like fun!!Oh well-this is the last day for Olivo's--check out their sales for the last time.
I will nmiss them-they were lovely people.

Thanks, Melanie... Sad about Olivo's. AR least he had the chance to say goodbye.

That is the funniest review of a smelly club I've ever seen. I think you can say the same of the stench in SuperDive.