Next round of Aqueduct racino plans unveiled, including a 425-seat buffet 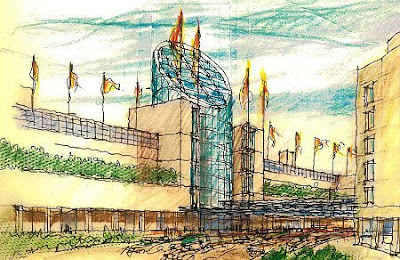 Now that the OTB is ready to file for bankruptcy, Aqueduct officials have unveiled two of the plans to turn the racetrack into a racino. Again.

As the Daily News reports:

"We want to make it a place that both reflects the old New York and the new New York and the community within which it sits, which is Queens," said Bob Blakeman of PS&S Design, the project's architect.

Some 1,200 video slots could be open by April. All 4,550 machines would be running by November 2010, officials said.
A 300-room hotel, garage, racing museum, shops, restaurants and 2,500-seat entertainment center would be done in 2012.
The group's plan would give the state $101 million upfront.

Thanksgiving at the Aqueduct, Part 2
Posted by Grieve at 12:17 PM

"the community within which it sits"
-- What a warm way to put it.

They should give Mario Botta a few rolls of quarters when they open, since they're ripping off his SF MoMA chopped tube skylight.