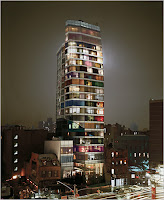 Jill left a comment yesterday about a party she attended at the Cooper Square Hotel. Thought you may enjoy it.

The party was in the 21st floor suite. As far as hotel suites go it was nothing, and let me tell you I've seen a lot of them in lots of cities. Except for the view it was pretty vanilla. They took out the furniture so maybe with furniture it might be better, but really... The giant wraparound deck had no cover from the sun/rain, nor was there furniture out there either (again, maybe for the party they took it out.)

De rigeur slidy wood floors, big windows, very plain "minimalist" I suppose but to me it looks forlorn. The one couch was so wide you coudn't sit back without putting all your legs on it, which is not a good look at a party. I was the only one sitting/perching.

Tiny elevators with a very very long wait. In fact, they mixed the guests in with the party goers so the people who were paying hotel guests couldn't get to their rooms in a reasonable amount of time.

An elevator load of party goers had an argument with one worker when we couldn't get to the 21st floor via elevator, and then they wouldn't let us up the stairs from the 20th floor. He accused us of wanting to sneak in - this to a group of fairly middle aged people in business clothes. Ha! He threatened to call security. I begged him to call security. A handiman we ran into fixed the elevator to bring us up.

When I was leaving there were a few young people hanging around the front desperately trying to get in, and the bouncer wouldn't let them through. There was absolutely nothing for them inside, but they sure thought they were missing something, only because they weren't allowed in.