Line of the day: "Swimming in trash containers is mentally sanitizing" 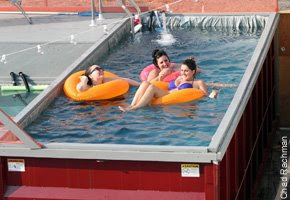 I missed this story. On July 7, ReadyMade wrote about swimming pools in Brooklyn that are made out of old dumpsters. Curbed linked to it a few days later.

Anyway, the Post did a piece on it today.

Bleached, cleaned, filled with sand and lined with plastic, the giant trash bins are now the centerpiece of a "low-fi country club," said David Belt, who as president of Manhattan-based Macro Sea is the man behind this Dumpster-diving project.

The pools, which Macro Sea debuted on July 4 in an otherwise abandoned Gowanus lot it has rented through the end of August, are not open to the public, but those in the know say swimming in trash containers is mentally sanitizing.

"In these economic times, everybody feels like garbage anyway," said Belt.

Email ThisBlogThis!Share to TwitterShare to FacebookShare to Pinterest
Labels: dumpsters, swimming in dumpsters

It's a pretty brilliant idea I think - good example of "Re-Use".

A bit of NYC Rhymology at my link, inspired by this post.