Gee, I think a pattern is starting to emerge here... 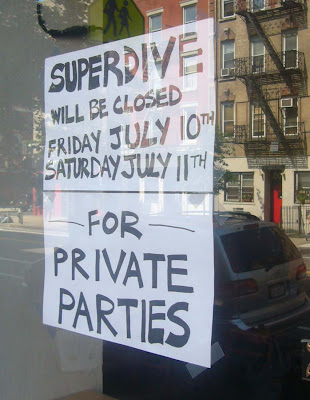 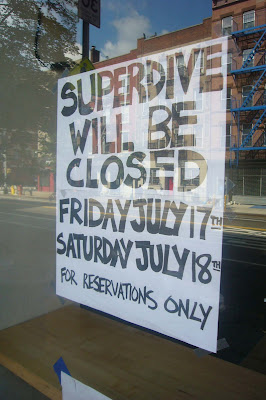 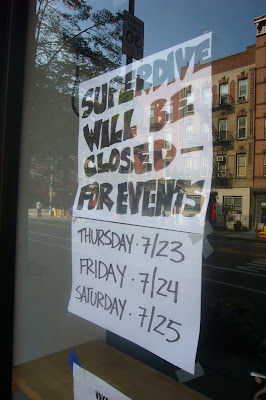 Meanwhile, NYPress pays a visit in the current issue.

Located on rapidly douchifying Avenue A, this plastic-cup-wielding, keg service-offering beer pong hot spot is the stuff of frat-boy dreams — in a good way. We think.

"We’re booked through September on keg service," said Alex Mynatt, a bartender at Superdive, which opened earlier this month. Mynatt credited online press as the secret to the bar’s straight-out-the-gate success: When word gets out that you let customers actually mix their own drinks, the masses are bound to get curious.

"People ask us, ‘why do you expect us to tip you if we’re the ones making the drinks?’" said Mynatt, who teaches the often heavy-handed pourer how to shake, stir and twist like a pro. "It’s obvious. Because we’re the only bar that lets you do that."

You're not holding a weekly LES blogger meet-up that you're not telling us about, are you? And are you providing limo service (like the one from Saturday night) to the attendees?

just make sure to get a keg of PBR.

I need an explanation of what a Beer Pong is.

two things will happen to this douche palace, either they go broke due to people mixing their own drinks that are heavy on the alcohol or they vanish into a haze of stupidity ala studio 54.