Jim Carroll: "He was an amazing mix of imaginative power at work and straight-up stoner dude" 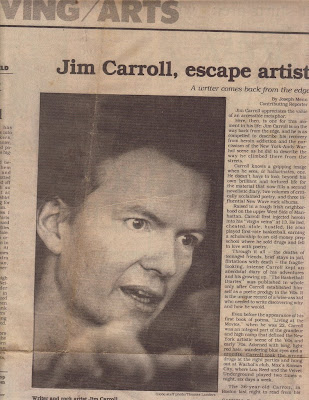 Great link at boingboing that takes us to a 1987 interview with the late Jim Carroll in the Boston Globe. The story is not available online, but writer Joseph Menn uploaded the article in three sections here on Flickr that you can read.

"[The interview took place] in person, at a Boston hotel in 1987. He was an amazing mix of imaginative power at work and straight-up stoner dude. He talked about how when he was in heroin withdrawal, the images he wanted would pile up uselessly like parked cars, then move too fast for him to catch, as in 'Koyanisqaatsi.' But first he saw the chocolate on his pillow and said, 'Man, I could dig THAT later!'"
Posted by Grieve at 3:49 PM