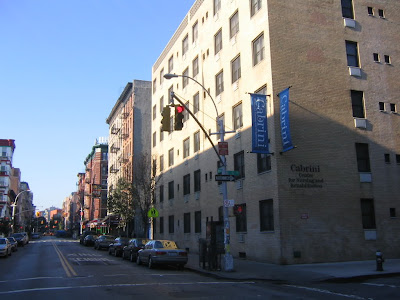 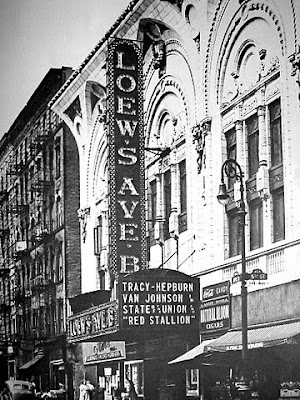 The Avenue B was the top Loew's house on the Lower East Side until the mid-1920s, when the circuit took over the Commodore on Second Avenue, which was a much busier area for entertainment and shopping. The Avenue B was reduced to playing movies at the end of their Loew's circuit run, and remained so until its closure around 1957-58

Previously on EV Grieve:
Former landmark countercultural theater now for rent on Avenue B
Posted by Grieve at 7:00 AM

I used to see monster films and scary ghost stories there. And that's the first time I ever saw a real live guy making out with a real live girl. I was probably seven or eight years old. Times were very different back then too.

Interesting, I was in the middle of editing this novel when I came to this passage

What looked like a school house took up the east side of Avenue B, running from 6th Street to 4th Street. An old movie theater stood on the east side around 5th Street showing monster films. Around it were stores, bodegas and people just lazing about.

My sister just wrote back and said:

Nice - I don't remember the building. Did I go to the movies there with you? I remember Marie Cichocka, her brother Bohdan, you and I going to the movies almost every Sunday afternoon. We especially loved horror movies. I remember having a lot of fun.

She has a too short memory...

What a wonderful story. How many people can say that they demolished the tenement where they were born and built a (movie)palace in its place. I will have to read more about Mr. Loew. I grew up on the Bronx where the most beautiful of his theaters,(I say with great prejudice) the Paradise, was built in the 1920's. Clouds that moved, stars that twinkled, a lobby to die for with a gold fish pond.

My family lived in 511 East 5th St for over 50 years. I remember playing in the rubble with my friends as they demolished the theater to build Cabrini (when no one was there of course). Great to see these pics!

The Loew's theater was demolished to build the nonprofit Cabrini Nursing Home that served low-income elderly on the lower east side. A couple of years ago Cabrini was forced to close and sell, couldn't even get a lease extension that would allow them to build on another site, and had to move some 100 patients to other facilities. The new owner has converted the building to luxury apartments, known as Bloom62.