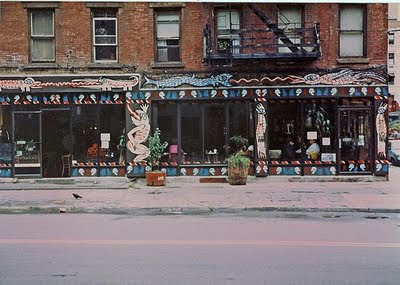 Nice piece on BushwickBK about Life Café, which recently celebrated its seventh anniversary in Bushwick. Co-owner Kathy Kirkpatrick opened the first location, of course, on 10th Street and Avenue B in 1981. Here's a snippet from the article:

[T]here were also many hardships in running a café that could barely stay afloat. Kathy held an office job in midtown and all the work was straining her marriage. The couple split in 1984 and David wanted to sell the café. Kathy refused and resolved to run it by herself, just as New York City sank into the crack epidemic and the East Village swarmed with unpredictable junkies.

"It was hard for us working in a little neighborhood café, forced to do drug intervention, something we weren’t trained in or prepared for," she said. "We had people shooting up and OD-ing in our bathroom and things were getting pretty ugly."

[Photo via Cactusbones]
Posted by Grieve at 6:38 AM

What does this new generation know about artists cafe's LOL. They just know how to type on their stupid APPLE computers all night at Starbucks and think they are artists. They are a bunch of posers.

All of the Artists went to Peekskill, New York upstate. They can't afford the rent here anymore. It's for trust fund babies and the upper middle class affluent types.

afraid to see it I mean.