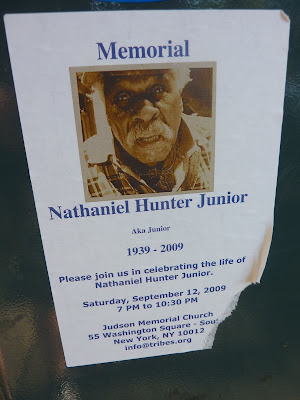 There was a memorial service Saturday night for Nathaniel Hunter Jr. I had planned to do a piece on him, but it didn't come together ... So, here's information from other sources. First, the Times has a feature on Junior today. Meanwhile, as Scoopy noted at The Villager, Hunter — aka Junior — died in May. He "was known as the 'Mayor of Tompkins Square Park' when he lived there on a bench in the 1980s, holding forth with one and all."

Junior was featured in a Times article from July 31, 1989, titled "Worlds Collide in Tompkins Sq. Park."

Here's how the article begins:

"It's an interesting, intricate social situation," Nathaniel Hunter Jr. observed early yesterday morning from the bench in Tompkins Square Park, where he has lived for the last six years. "The internal contradictions are constantly slamming into each other."

In the after-midnight darkness, nearly 300 homeless people were stretched out in the park -- sleeping, trying to sleep, talking and drinking. Their number has steadily grown from some 137 who were evicted when the police tore down their tent city two weeks ago after a series of clashes. A cooking fire smoldered near some bushes, a tepee and other shelters had been set up from sheets of plastic and cardboard refrigerator boxes.

More and more homeless people have been trickling into the park, attracted both by the latest burst of public attention and the number of soup kitchens operated nearby by religious groups, turning the park into a kind of a sanctuary and rallying point for the homeless.

Tompkins Square Park, 10 1/2 tree-shaded acres of worn pavement and scuffed grass, is the center of a singular part of Manhattan known variously as the Lower East Side, the East Village, Loisaida, Alphabet City, Community Board 3 or the Ninth Precinct, an uneasy community that is the meeting ground of the two most powerful forces in the city today: drugs and real estate.

The story told by Mr. Hunter -- a gentle, shrewd-spoken, gray-bearded black man known as Junior, who keeps a small rake and shovel by his bench to tend the nearby cherry and black-oak trees -- is that of many of the city's homeless: a single, massive blow pushed them over the margin. In his case, he said, it was the purchase of the nearby high-rise where he lived by speculators who turned it into co-ops, leading to a long, unsuccessful struggle against eviction.

"I was doing everything right, paying my rent on time, paying my cable TV on time," said Mr. Hunter, who was then a self-employed contractor. "But they wear you out after a year and a half or two. I was physically, financially, psychologically pooped out. I just wanted to be left alone, to find a spot in space to cool my head out. So I came here. I found a sanctuary, really, trees, open space, solitude.

"Of course at that time, it wasn't so pulsating with events. But now we have cook fires burning, political activists yelling, police around, all the things I had been running away from," he went on, suddenly bursting into a whoop of laughter at the irony. "Now I'm worried about my actual eviction from the park."

He and many other homeless people were evicted from TSP. As Scoopy noted, he ended up get a job and with the Parks Department and worked at Washington Square Park.
Posted by Grieve at 7:10 AM

Thanks for the information on "Junior". RIP--
He may be gone but he is not forgotten. Those were the days...stepping over people sleeping in the stairwells and on roof tops. I was going to a job I did not particularly like-underpaid-no gratitude--trying not to wake anyone up.I still have compassion for the undomiciled-the under dog was always a better character than the yuppie--cause one has feelings and the other is a non feeling asshat.