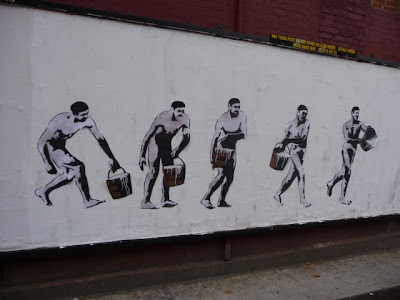 As the Times reports, there was "a bizarre cat-and-mouse game" on billboards across the city yesterday.

One group of artists and activists spread across Lower Manhattan, transforming innumerous wheat-pasted posters — the ones that readily sprout over scaffolding — into their own canvas.

They would whitewash the posters and then create their own work, or allow anti-advertising advocates to spread their own messages.

But just as quickly as they whitewashed and put up art, workers arrived to put up new posters where the artists had obscured the old ones.

And so it went, back and forth, with drama, confrontation and even a few arrests by day's end.

The takeover efforts were organized by an artist, Jordan Seiler, who founded a group called the Public Ad Campaign to question and challenge the use of outdoor ads in public areas.

I took the photo here on Seventh Street and First Avenue.
Posted by Grieve at 6:30 AM