As you read this, the CB3/SLA licensing meeting is just wrapping up (that joke never gets old!). An EV Grieve reader was there for part of the meeting and kindly filed this report. For that, we offer many thanks to this dedicated soul.

Things got off to a good start at 6:45 with the announcement that eight agenda items would not be covered, leaving only 27 matters to discuss.

After a brief discussion of budget priorities (largely a formality) the action got underway with Renewals with Complaint History.

First up was St. Dymphna's of 118 St. Marks, looking to renew its full liquor license. The board raised the issue of whether the establishment is allowed to utilize its back yard space, citing a 2007 DOB decision which indicated the back yard could not be used, and the fact that its SLA renewal application did not indicate a back yard space was in use, though it is. The establishment is under new ownership, and the current proprietor indicated he was not familiar with that DOB decision or the previous complaint history. The Board voted to approve the renewal with the stipulation that the back yard space not be used.

Next up was Spur Tree Restaurant of 76 Orchard Street, looking to renew its restaurant wine license. No one was present to represent the applicant, and the board voted to deny the renewal for non appearance.

That took us right to the main event -- Le Souk -- which was called in not to discuss a renewal but to address the complaints that have been lodged against it since reopening. The discussion started with a recap of the December 2008 board decision to not vote on the club's renewal, the club's license being suspended at that time. Six residents were then given an opportunity to speak. Le Souk's opponents described the improvements in quality of life during the time the club was closed.

One resident was quoted via letter as saying "life was so peaceful on Avenue B" during that time. Opponents reported that since the club has reopened, "all sorts of mayhem" has occurred, including "crazy fistfights" and "animal behavior." One resident opined about the nature of Le Souk patrons, stating that they "drive the taxi drivers to the point of insanity," a reference to the honking problem on the corner. It was also noted that the police do not ticket for honking on the corner of 4th and B despite posted warnings, purportedly because they are not able to determine which cars are doing the honking.

Seriously. One resident indicated that "life has been intolerable since Le Souk has reopened" and the letter writer was again quoted, saying "a superclub like Le Souk has no business in the neighborhood." Residents also cited loud music emanating from the club and Web site reviews which tout dancing going on in the club in violation of cabaret laws.

Two Le Souk proponents spoke in favor of the club, one saying that "the community was in shambles while Le Souk was closed," the argument focused on economics and the idea that this is not the time to shutter a club that brings much business to the neighborhood. He also suggested Le Souk is doing a better job now relative to the abysmal job it had done in the past (not the most ringing endorsement) and made a reference to some people maybe preferring to live in Staten Island.

Le Souk's proprietor indicated that traffic is a problem throughout the East Village and not a function of his club, saying in fact that he does not have a traffic or congestion problem in front of his establishment. He was then scolded by the board for failing to organize a meeting with residents to work through issues outside of the CB meeting process, as he had promised to do sometime in March. A member of the Le Souk management team indicated they would make the meeting happen this time. It was noted that Le Souk has 7,000 square feet of space.

By this point the room had become quite hot and a Le Souk proponent had to be directed by the board to stop speaking out of turn, one board member wondering aloud if security needed to be summoned. After much discussion of the language of the motion, the board voted to deny the renewal, when it comes up. In response to a direct question from a resident, asking if Le Souk would begin turning down the volume of its music starting this weekend, Le Souk indicated that it would.

It was now 8:02. Still so early and only 23 agenda items to go. Next up was Thailand Cafe on 2nd Avenue, looking to add some manner of outdoor seating. The board expressed concerns with the already numerous outdoor seating arrangements on that stretch of 2nd Avenue, and whether the clearance depicted in the plans between the outdoor seating and bus shelter in front of the establishment would actually be as large as the plans suggest (15 feet). Residents were organized against the plan, 10 or so standing together to indicate their opposition. One suggested the idea of dining outdoors several feet from a stream of city buses would perhaps not be the best dining experience ever. There were also 23 letters submitted in opposition. The board voted to deny this plan due to bus shelter proximity and existing levels of sidewalk congestion in that area.

At this point one of the board members learned that an attendee was waiting to speak on the matter of Chickpea, agenda item 28, and let him know that the item had been announced among those canceled at the outset. Mercifully this happened two hours into meeting and not 10.

Next up was Cien Fueguos LLC, looking to open a Cuban fine dining establishment at 95 Ave A. The owner and team made a fantastic presentation, top to bottom. They produced 1,000 signatures from East Village residents in support of their plan, 200 of them living in the immediate vicinity. Numerous residents spoke on their behalf including the owner of the building. The presentation included statistics on the prevalence of Cuban restaurants in Manhattan (there are just 43, and only five of those are considered fine dining establishments) which were compared to comparable statistics for Italian restaurants. The owner operates four other establishments in the East Village without incident and the management team's experience running orderly restaurants was touted, as was the fact that the venture will bring 40-50 new jobs to the neighborhood and include a sandwich shop. The board issued a favorable opinion on the application with basic stipulations, some of which the operating plan for the establishment already included.

(Someone said this owner is the guy behind Bourgeois Pig and Death & Co.. I thought Death and Company had some issues in the past, but am not sure. They were pretty clear about the owner running four places and not having problems.) 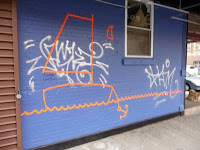 Next up was Caffe Bon Gusto, for which the sailing was not smooth. The applicant himself did not show up, instead sending two representatives, one of which seemed to be his attorney. The board noted that the application (for a wine license) was more or less identical to the application it rejected in September 2007. And that with only 10 signatures in support of the restaurant -- four of those from residents not in the immediate vicinity -- the applicant has not demonstrated that his establishment will provide a substantial benefit to the community, a requirement to secure a favorable opinion from the board in a resolution area. No residents signed up to speak for the club, but the applicant's attorney noted that no residents turned out to speak against it either.

At this point our reader left. It was after 9 p.m.

How do they manage to get through 27 agenda items? I can't fathom it.
Posted by Grieve at 7:20 AM

Yeah, St. Dymphna's has quite changed (in terms of its patrons) in the past couple of years. It's not the neighborly Irish pub establishment anymore, where one can go for a quiet drink and read, or swap stories with the regulars. It has become another place for the tourists and transplants to see and be seen, esp. on weekends and Thursday nights. The outdoor has become a place for the loudmouth yuppies/yunnies to show off their sense of self-entitlement. They also treat and act as if they're at a huge beer garden, just because they can drink beer in that small garden. Nonetheless, I'm glad they got approved. It's still a fave place to go for a pint, as long as you go on a weekday or early weeknight. I do not know the new owner of that place though. Let's just hope it won't turn into another NYU frat boy hang-out, much like Ryan's Irish Pub.

As for Le Souk being denied, fuck yeah!

That's some report. Go Avenue B! Way to represent!

Why doesn't Le Souk open on Staten Island? This is a serious objection. There are not many nightlife options in that borough, lots of out of the way places for a nightclub to open, and it seems that most of Le Souk's clientele is from Staten Island anyway. There is no real connection between this place and the EV, it could be anywhere in the US. So why not just open on Staten Island where they just have to deal with the mafia and not with CB3 as well?

I am not for or against Cien Fuegos (the Reader was clearly in support) but 1000 signatures (800 not in the vicinity) might only mean that they are good at collecting signatures. If the applicants own several restaurants they can simply ask their patrons, will you sign this petition to help us open a great new Cuban restaurant? and most people will cooperate. Also, EVERY new venture brings new jobs so that is not a special selling point, is it? A "fantastic" presentation is obviously not the same as a fantastic restaurant--though it could be the same.