Looking at the "Mayne Death Star" 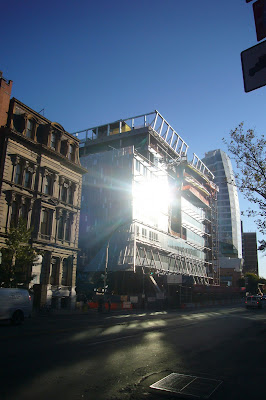 I never thought I would say this about a work by Thom Mayne of Morphosis, but I think 41 Cooper Square is too small. Cooper Union’s new, sustainable academic building on Third Avenue is nine stories, 175,000 square feet, takes up an entire city block, and yet, with all the other wonderful and terrible architecture happening on the Bowery and its side streets (the Cooper Square Hotel’s tower version of Frank Gehry’s IAC Building, Herzog and de Meuron’s disco-visionary 40 Bond, Foster + Partners’ Sperone Westwater Gallery) it blends right in. All the photographs I had seen, most taken from the air, made it look like another Mayne Death Star, a chunk of some intergalactic space ship deposited here for repairs (there is that nasty cut across the front).

Another observation: "At the sidewalk 41 Cooper Square might as well be set in the middle of a parking lot in Mayne’s native L.A."

And in the end...she said the building leaves her "just curiously bored."
Posted by Grieve at 6:47 AM

help me obi wan kenobi, you're my only hope.