And did you know that city parks are reviewed on Yelp? 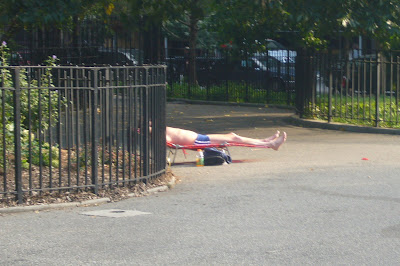 The inhabitants of Tompkins Square Park are people you could probably find in any large metropolitan area in the world. What makes TSP unique is the high concentration of mentally and/or chemically imbalanced folks, mixed in with some hobos, burnouts, stoners looking to score, scorers looking to stone and locals who're looking for some sun. Everybody and nobody is there, and if you're into people watching, it makes for a good couple of hours.

What ruined my day was the fat lady sitting across from me wearing a jean skirt and no panties. How did I know this?

I didn't even mean to look. You just couldn't avoid it because she took up about 1/2 of my field of vision.

And a 1-star review:

When I walk through this park, I'm constantly looking over my shoulder for fear of getting mugged or stabbed.

I have no problem with homeless people finding shelter in the park. I do have a problem with hardcore drug users shooting up and smoking crack. Call me crazy, but that disturbs me.

On my last trip there, this coked up lady took it upon herself to change outfits three times right in the middle of the park. Her version of a fashion show. Another bum sat on a bench by the entrance with blood spewing from his nose. No worries, he was too high on something to notice.

The park is crack-tastic at best.

And another 1-star review:

Errrmmm, maybe I'm just not "getting" this park. I was here for an hour last Sunday and spent my time circling the park looking for a hobo-free zone. The southwest corner, especially, seemed to be packed with a dirt-crusted crowd of semi-homeless people of mixed ages. Several of the younger Tompkins hobos were dressed in clothes that were probably quite fashionable at one point, but now caked in dirt and quite brown in color. I was impressed that they were not just resigning themselves to dirty jeans and ratty t-shirts; maybe they were homeless by choice.

There was a small portable soup kitchen type cart in that corner of the park serving this brown-colored mushy-looking food to these folks who ate with their fingers and licked the plates. When I finally did manage to find an isolated bench to read my book, there were strange smells emanating from the bushes behind me that I tried to ignore. It was probably p00p; the grass didn't seem to stand a chance of making it out of the ground clean. After a few pages of reading, I was interrupted by a comparatively presentable stranger. He commented that I looked "uncomfortable" (undeniable) and proceeded to attempt to read my sign and, I think, ask me on a date. He had weird tics and stared way too intensely at me during all this time. I am not sure why I stuck around long enough to let the conversation progress to that point.

In short, I am TOTALLY one of "those people who finds Tompkins Park gross." It's just not the place for me to have a relaxing Sunday afternoon. I don't want a park with "character" when what I really want is to nap outside without worrying about being pissed on, touched, robbed, etc. So, back to Central Park it is, where I will hazard my chances with the strollers, toddlers and frisbees. Or, Madison Square Park, where I can eat my Shack burgers and hang out with the designer dogs eating frozen custard.

"I don't want a park with "character" when what I really want is to nap outside without worrying about being pissed on, touched, robbed, etc."

This person should move out of the city and purchase a home someplace far out in the country. Then build a 15 ft. high security fence around the property. Should be safe to "nap outside" then.

Obviously this is someone who is rather new to the city or they'd be GLAD the park is as tame as it is now compared to 20-25 years ago.

Each time I'm in NYC (which isn't nearly often enough!) I make it a point to come down to TSP and spend a few hours soaking up the atmosphere and I've never regretted it...it's a beautiful place to see your fellow humans being human...

ha, these quotes are amazing.

"...where i can eat my shake shack burgers and hang out with the designer dogs eating frozen custard."

if the "mentally and/or chemically imbalanced folks" are described separately from "the hobos, burnouts, stoners looking to score", then does that mean that the mentally/chemically imbalance folks are the yuppies, fro-yo consumers, b&ts? or they could just be Noot and her posse.

And here I thought TSP was so incredibly gentrified compared to the old TSP. No tent cities, no needles all over the place, no open air toilet. And a kids' playground, for chrissakes. And privileged, obnoxious field hockey clowns on Sundays.

I can't find fault with these reviews. If you consider that the reviews are meant for people who have never visited the park -- not East Village residents -- you have to acknowledge that they're accurate and honest. It's true the park has homeless people, crusties, and weirdos. As East Villagers, we know that's the way it is. It's not particularly strange to us. Many guests/tourists, however, don't have that kind of element where they live, so it's unusual and scary to them. I can't criticize them for their perspective. I'd rather guests know that TSP is not a squeaky clean park than visit the park and be horrified by what they have never been exposed to.

I love TSP. When I'm feeling down, I watch the dogs in the dog run (which is the best one in the city). I enjoy getting apples at the Sunday market and watching kids play basketball or street hockey. I love the Howl Festival activities. I could go on... My perspective on the park is as an East Village resident. It's not going to be the same as someone who lives elsewhere.

That last review has got to be a troll...where do these people come from? They can't possibly be from any urban area. Then again, I would think a tourist might find TSP absolutely fascinating.

I love TSP on a Sunday afternoon and am just fine without Shake Shack Dude whining on the bench beside me. It's one of the best places for people/dog/bird watching.

Contrary to what seems to be popular opinion: the city parks are for EVERYONE. As an East Villager, I don't mind looking for a spot away from anyone I don't want near me, and that includes the chatty cathy who would probably feel more comfortable in the shake shack line, posing it up for some wannabe yuppie puppie. It's rather nice that all of the city is not a fashion show ... yet.

the park has sure changed a lot since the days of tent city, but i still have a lot of fun in there talking to all the nutters and dog run folx..still the best park in the city.

A couple of years back, a friend and I decided to brown bag it in the park on a mild Saturday afternoon. It was one of the most relaxing and entertaining (and not in a lots mock the regulars sort of way) afternoons I had that entire year.

Thanks for all the comments.

I love TSP too... Now if the city will only rebuild the bandshell...but that's a post for another day.

I like some other EV parks, Sauer and East River, for example, but I spend most of my park time at TSP.

I know it's nuts but I keep thinking: I'd love to see the park grow into Ave. A and Ave. B, even given the obvious work that would have to done to reroute traffic, etc. (Well, Union Sq. expanded into the street. And, the George Hecht Viewing Gardens grew up in the street. And, um, well, yes, it would require some doing. I know it's nuts. The Parks Dept. is more likely to, I dunno, turn the Temperance Fountain into a Shacklet and set up craft vendor stalls in the oval, at best, than get expansionist on our asses. )

When you begin to see parks being reviewed, you know it's time to leave NYC. Sure evidence that it's truly dead.

Hmm, I kind of like your idea. Curious to see a rendering of how this would work.... Crazy, yes, but...

Hmmm, that's not a bad idea.

I'm a little swamped at the moment but maybe, if I get around to it in the next year or so, I'll send a drawing of how it might work.

@ Goggla: Why am I a troll? Because I have an opinion that differs from your snarky, selfish one? I simply feel that the EV does not belong to anyone specific. To exclude anyone from enjoying the EV is wrong.

I'm almost certain that she meant that last review on Yelp... Her comment wasn't directed toward you.

Yes, I meant the Yelp comment. Sorry I wasn't specific.