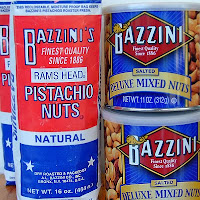 Downtown Express has the bad news:

In the latest example of “new Tribeca” beating out “old Tribeca,” the Bazzini grocery, cafe and nut shop on Greenwich St. will soon become a Sarabeth’s restaurant.

This won’t be the first time that a neighborhood fixture in Tribeca becomes a chichi food destination — but it could be one of the last, as some see Bazzini as the final holdout of Tribeca’s past.

Bazzini opened 119 years ago. The current owners said the new Whole Foods down the street was cutting into their business.

The Tribeca Tribune had the story earlier this week. And apologies to Eater: I missed their piece on this news last week. The story is here.
Posted by Grieve at 1:43 PM

Nooooo. I love Bazzini. Not quite as much since they tarted it up, but I love it nonetheless. Very very sad.

who said it ain't over til it's over. Nada

Eater had the story last week.

Thanks, anon — totally missed that.

And they don't even make up for it--not even for good pr--by locally sourcing. The Houston St. store, for example, could source a lot more than the occasional Balthazar loaf of bread a few containers of pickles within, oh, 10 blocks. Although quite a few of the places have gone out of business since the WF arrived, there's cheese, sausage, pirogis, babka, noodles galore, dumplings, and ice cream, for example, all produced on a more or less wholesale basis in the 'hood. They don't' even source from the obvious places at the Farmer's Markets. (Other than Ronnybrook.)

The stuff that WF has "Local" tags on it tends to be, oh, Jersey tomatoes and cantalopes. Yeah, it's kinda local but it's from a large farm and, well, my local Associated sources better Jersey produce.