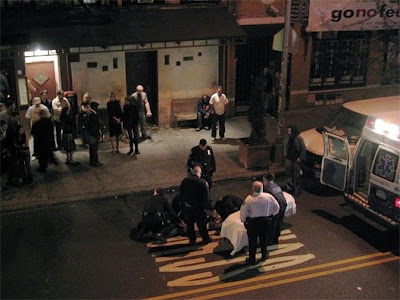 Several people left comments yesterday in response to Le Souk closing up on Avenue B. A sampling:

First Le souk has been on Ave B more than 8 yrs. (get your facts straight bro the club has been there since 1999)

This place has been closed by several parties (no pun intended).

1 The peeps who moved in years after Le Souk and several other biz wrestled the area away from the crime that kept these same people hiding in there safe hoods.

2 The Neo fascist LOCAL and NYC administration, that is more intent on trying to facilitate/negotiate mutli-billion dollar deals with construction developers than creating programs to help build and sustain small businesses.

This seems to me an amazing situation in the current economic climate. To crush any kinda business, let alone one that brings thousands of dollars a day to the local economy. Call me silly or irresponsible but it just seems like an absurd maneuver to me.

Why all the haters? This neighborhood was nothing before Le Souk arrived. You will regret your petty 311 calls and waa-waaing baby talk to the community board when the rats and drugheads take over. You will beg us to return. Guess we will be giving our money now to the good people on La Guardia Place, home of the Le Souk Harem. I hope they will appreciate all that Le Souk regulars have to offer a neighborhood.

If you don't want to live on a street or ave. that has businesses, perhaps moving out of the city would be best for you. The city is alive and people go out and night life abounds.

Forgive me if I'm wrong but isn't LeSouk a Mom & Pop shop that has been put out of business by people complaining everyday about the noise and their over crowding?
Are we mourning the loss or congratulating the NIMBYs who blocked them from doing business.

It's very arrogant to feel that just because someone wants to go out get really drunk and be loud and obnoxious that it's okay to be a disturbance to others and that residence ought to be "grateful" for you coming and bringing revenue into the neighborhood - because of course it was rat and drug infested before, right? And was "nothing" before you came spending your money, right? Unfortunately this is the mentality that is causing clubs and bars to experience difficulty when it comes to getting liquor licenses.

It's worth noting that -- neighbor complaints notwithstanding -- Le Souk's liquor license was terminated by the SLA because the club failed to operate in compliance with applicable laws, not because residents had issues with it. Surely the complaint history did not help, but this termination was about more than noise complaints, and it went through the court system.

For all of the talk about the negative impact on businesses, why did local business owners not show up en masse to speak on behalf of Le Souk at community board meetings, if this one particular club was truly that important? Closing Le Souk does not represent a fast track back to 1980. Countless nightlife spots in the East Village operate successfully as good neighbors and no one has less fun as a result.

Hey, you think maybe closing Le Jerk just could be a fast track to 1980?

Sure was a nicer class of people around here back then. Tougher, but not as obnoxious or clueless.

Keep up the fine work, Grieve.

I'm embarrassed to say that I've been in Le Souk, not recently, and it really reminded me of some of the local clubs in New Jersey when I went there.

These are not necessarily bad places. If you like that sort of thing, they are the sort of things you like. But they don't fit well with a dense city. I'm not sure why we can't have more nightlife spots that caters to people who live in New Jersey in New Jersey, and fewer here.

This neighborhood was nothing? I can't imagine how I survived all those years in a pre-Le Souk primoridal soup.
Yeah, it was great in 1980. Crackling with energy, not dollars.