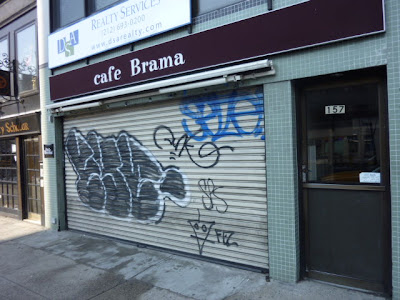 An EV Grieve reader passed along work that Cafe Brama on Second Avenue near 10th Street had closed... We walked by several times ourselves during prime business hours...and the gate was always down. And no one is answering their phone.

I was unaware of Cafe Brama's origins...Per their Web site:

We, Kostas & Christos, brothers, were born in Poland as children of political refugees, and we grew up in a strong Greek community proudly promoting our culture. After the fall of the Berlin wall Poland become a place with unlimited possibilities and in 1992 we opened the first Cafe Brama. We named it "Brama" which means "Gate" in Polish since it was founded in Szczecin, Poland in the historical Brama Krolewska (King's Gate). King's Gate was built in the acquisition of Pomerania by Prussia.

In 1996 we moved to Warsaw to open another Cafe Brama there and our success allowed us to expand the business and open six locations in the Polish capital. After fourteen years of success and recognition we decided to open Cafe Brama in New York and we chose the East Village because of its casual and comfortable ambience. We belive that the community will welcome the quality and style of the food that we love.

They closed for good. They were trying to sell it for pass few months but there were no takers. Strange since they had a full liquor license.

Too bad they need to close