I've been waiting to write the obituary for the White House (or Whitehouse to some), the last of the neighborhood's SROs at 338 Bowery. There's a long history at this four-story building erected in 1916 that's now serving as a hostel as well as a permanent home for a handful of low-income residents... The building’s owner, Metro Sixteen, is affiliated with the hotel developer Sam Chang. Their plans: demolish the White House and replace it with a nine-story hotel.

And this item at Curbed today makes me think the end will be here sooner rather than later:

A Curbed tipster notes, housing court hearings for remaining residents — many of whom are in pretty rough shape — are something of a regular occurrence. 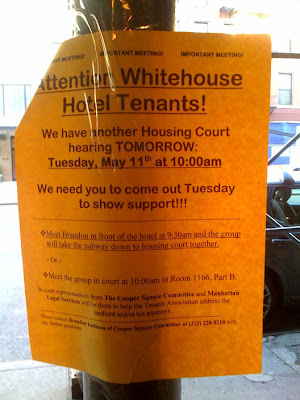 Email ThisBlogThis!Share to TwitterShare to FacebookShare to Pinterest
Labels: save the Bowery, the Bowery