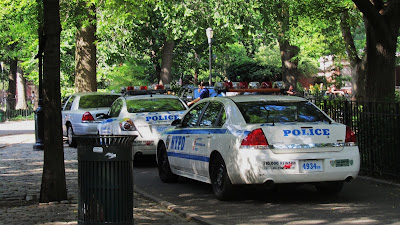 The Villager has an article in this week's issue about Asylum, a group of travelers who hang out in Washington Square Park. The members claim that the NYPD leaves them alone since they're not bothering anyone.

Which leads us to this passage:

However, Hollywood claimed that this isn’t the case in Tompkins Square Park where rumors are that the police have driven some homeless people out of the park permanently.

“The hard drugs are in Tompkins,” said Hollywood.

“I don’t go to Tompkins Square Park because there’s a f---ing bad vibe there. It’s Heroinville!”

Police officers make it extremely hard for the homeless to stay in Tompkins Square Park anyway. They tend to confiscate transients’ belongings as well as harass them incessantly, the transients say.

“You can’t even lie in the grass,” Russell said. “Just because we are homeless doesn’t mean we don’t have rights!”

[Photo by Bobby Williams]
Posted by Grieve at 6:50 AM

This answers the question of: What do you get when you mix a Lou Reed song with a Jimmy Buffet tune? Wastin' away, indeed!

Can we please stop calling these people 'travelers' ? Scumbags, addicts, pick a name but not travelers.

Where's St. Patrick when you need him?

Well, they have rights, but they dont have a right to be in a city park, where they dont pay taxes to keep the park afloat, They dont volunteer their time to clean the park, but they sure do leave alot of garbage and their own feces all over the place. SO yea, lets have the police leave them alone, they arent bothering anyone but the tax payers.
Hey Marty, shutup no one likes you.

Actually, they do have the right to be in a city park, regardless whether they pay taxes.

@Jimmy Neutron: Wow, it's so easy to be a bully in a comments section! Oh and by the way, you might want to look into a little thing I like to call an "apostrophe."

You're kind of a douchebag Jimmy Neutron. I like Marty, he always brings something good to the party.

This is horrible that these poor people are being harassed byt he police, the law protects us ALL the same. All cops should have cameras on their badges recording everything they are doing and people should be suing the SH*T out of the city for infringing on people's civil liberties, ESPECIALLY those less fortunate.

ps Marty is THE GD BEST.

pps most of our taxes go straight to feeding the WARMACHINE.

@Ken From Ken's Kitchen, Glamma and Anonymous 6:24 PM: Thanks so much for your nice words! I enjoy your commentary here as well, stop by Mars Bar this Sunday around 4pm if you can, some of us will be hanging out and then it's over to the Chillmaster's! Great to know there's nice people out there in the land of the internet.

THIS coming from the man who says terrible things about Gruber 24/7?

@EV Grieve: Ha ha ha! You do have a point there!

Sigh, I hate to enter this argument as certain people ignore the obvious in order to attack the police above anything but this needs to be said:
1. Travelers go places, not just across the park. These guys are lazy junkies who stay off the grid because they don't want to work not because they can't.
2. All city parks have rules posted that can get you ejected from the property for breaking. The possession, consumption and selling of narcotics is one of them. Another one prohibits littering. There are others that the Crusties break, but I've made my point here.
3. Getting these people out of parks and businesses and stopping people from glamorizing their existence will perhaps reduce their population and get them clean and earning their own livings.
4. Those bastards are dangerous. I witnessed one of them pull a knife on a friend of mine for ejecting him from a bar after he was refused a cigarette.

Yes, we all break some of the rules here and there, but these particular scumbags (I agree that they should not be called travelers or crusties as those names need not be tainted any longer) are consistently breaking them. When I'm in the park, if I broke the rules and got caught, I'd expect to be "harassed". Why should they be held to a different standard? As much as they may suck, it's the NYPD's job to keep this park safe for all of us (mainly children and the elderly), and quite frankly, it's definitely not safe.

When a homeless guy says there's a bad vibe somewhere, you know things are bad. TSP doesn't have to be full of scum to stick to its roots. It will still be TSP without it.

years ago they were called hobo's caused they rode trains and went from town to town it is not nice when all u hear about the park how it is full of drugs yuppies and over staying chess players. might be time for people to say who's park our park once again ..

Hey Jimmy Neutron,
May I recommend you change your handle to Jimmy Moron.

As someone who has been harassed in TSP, I am glad to see the police cracking down on these people who are really just bullies. I don't know why some people romanticize them. They don't even live here. What gives them the right to come to our neighborhood, the park where my kids play, and pick on us? Thank you to the NYPD. I applaud their efforts and so do a lot of other working people in the neighborhood who don't deserve to feel unsafe when we are in or near the park.

@Uncle Waltie: I second that emotion! Thanks.