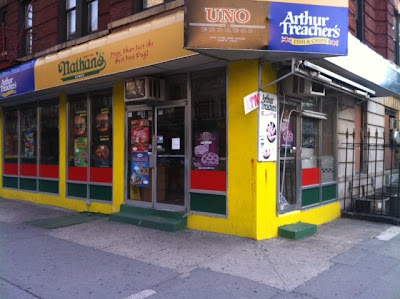 Back in April, the Pizza Hut-Nathan's-Arthur Treacher's combo on the northwest corner of 14th Street and Second Avenue closed. And on Monday, we noted that workers have started renovating the space.

Now EV Grieve reader Larry Goldberg passes along this tip. He spoke with workers at the scene, who said a restaurant from the folks behind Destino, the Southern Italian restaurant on First Avenue between 50th and 51st Street, are opening a casual dining spot here. (And, in case you are curious, Justin Timberlake is no longer a minority owner at Destino. Oh, and Eater notes that Destino is now closed. Sorry! Destino is very much open!)

Per the Destino rep, it is tentatively called the Meatball Factory, which will open in three months, or so. The rep said the plan is to create a menu similar to the Meatball Shop with dinner going for around $10-$12 per entree keeping things quick and casual.

P.S.
Bonus trivia about Destino... that location served as a key scene in "The French Connection," as Eater pointed out back in March.
Posted by Grieve at 6:52 AM

you want meatballs, go to John's on 12th and have them with spaghetti as they're meant to be.

At least they are being totally honest on ripping off TMS. And why not, that place inexplicably kills it. When I want a meatball, I go to Frankies or Northern Spy.

These alcohol-bacon-meatball-pancake interlopers won't stop until the entire population of New York City looks like Six Flags over Omaha. What's next, an artisanal funnel-cake shop? Maybe some curated-meat corn dogs wrapped in bacon and dipped in bourbon, served with whipped cream? This crap "food" is not just bland and unimaginative (remember when people came to NYC for authentic international cuisine?), it's pretty fucking disgusting, to be perfectly honest.

This line makes me nervous:

This will give someone an idea! It will start with a stealth delivery service... followed by a "trends" piece in the Post. Graduates to a food truck. Then a stand at a flea market or Governors Island. Then a brick-and-mortar shop in an "edgy" neighborhood. Page Six the Magazine "hot brick-and-mortar guys under 30" feature. Franchises. Cook book. Reality show. IPO. TV commercials. An app. Romance with that indie actress who cut an album and is now lunching with JJ Abrams.

what is this fuckery?

That's right - we all ate at Nathans every day and it is sorely missed! Give me a break. The place was crap. This has to be an improvement - or are we losing another valuable piece of New York? Sniffle.

Grieve, your comment was pure poetry. you could turn that into an entire post. brilliant stuff there! though i don't know who JJ Abrams is.

I'm all for giving Meatball Shop a run for their hipster money but the real question is will Meatball Factory serve delicious veggie balls too?

Note to readers, Jeremiah Moss is being sarcastic (I think). In Italy, meatballs don't go with spaghetti, that's an Italian American invention, just like putting them in a sandwich.

What's with all the outrage over a restaurant owner opening a (not a chain) meatball sandwich joint on that crappy corner of 14th St? It kind of makes sense to me, everybody loves meatballs, and most of the people who'll probably be eating here could care less if the owner's capitalizing on a trend -- they probably won't even know there IS a trend!

But will they serve Schwetty Balls?

Alec Baldwin at his best.

Ken, no sarcasm here at all. i'm talking about Italian American traditional food.

we already have that next to artichoke pizza on 14th street!

I'm not sure I want meatballs made in a factory. I wonder if it is the same factory as the cheesecakes.

Jeremiah I was heading over to Morandi in the West Village for some Italian food but your John's reminder changed up my plans so I'm heading to John's...

Thanks for the reminder!