Sidewalk aims to reopen by Aug. 5 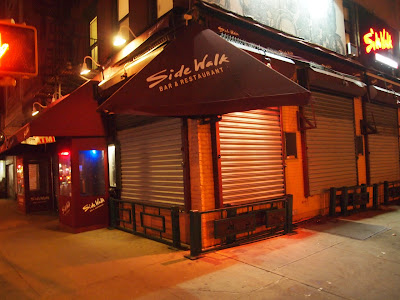 Sidewalk closed back on March 1. And the restaurant-bar-performance space at Avenue A and Sixth Street has been ongoing extensive renovations these past four months. It seems as if the place will never reopen.

However, there is good news from  a Sidewalk insider. Via email, he told us, "It looks like things are finally getting close to completion." He said one of the previously silent partners is taking over as the active manager.

• "From what I know, the menu should be the same, but stripped down to about a third of the size, mainly the items that were selling. Prices should be about the same."

• "The music program will be basically picking up where it left off ... with the Antifolk Festival pushed back to the fall."

• "As far as the back room goes, we've thrown a bit of money into upgrading the sound system and backline. There was an event booked for Friday, Aug. 5 a while back that everyone was excited about and we've set that date as the goal for trying to get everything done." [Ed. note — Boog City]

Meanwhile, Sidewalk's long-running open mic nights on Mondays have been taking place at a Gathering of Tribes on East Third Street ... another organization that could use your support.
Posted by Grieve at 7:00 AM

Email ThisBlogThis!Share to TwitterShare to FacebookShare to Pinterest
Labels: Avenue A, Sidewalk Cafe

Sidewalk was a pioneer in this neighborhood and I'm glad to hear they are sticking around.

We miss you Sidewalk. Not a week goes by without my friends and I sighing "this is the perfect day for Sidewalk". Come back soon!

Good news! Now, what about the pink margaritas??