[Updated] Letters about St. Mark's Bookshop; and an uncertain future

From the EV Grieve inbox ... a compilation of letters sent to President Bharucha of The Cooper Union on behalf of St. Mark's Bookshop.... 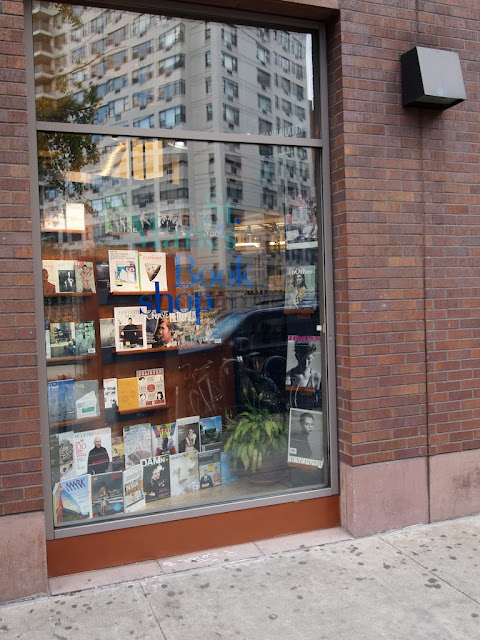 Please reduce the bookshop rent to $15,000 a month until the economy improves. To destroy one of the city's last, great independent stores for the sake of what to you would be a paltry increase in income would be ... if I may say this as someone who has been proud to appear in the Great Hall on many occasions, and to bring the PEN World Voices Festival there ... unforgivable.

Many of us care about this deeply. Save the St Mark's Bookshop. Please.

With my best wishes,

My father is an artist and taught at Cooper Union in the early 1960s and I have lived in the East Village since 1986. I've been a patron of St. Mark's Bookshop when it was located on St. Mark's Place and then when it moved to its current location. I walk by Cooper Union several times a day, always proud that my family was part of its legacy.

I am surprised and disappointed that a community has had to launch a campaign to urge you to reduce the rent of St. Mark's Bookstore, and to now learn that you are still about to make a decision. You should not have had to think twice about this. It's the right thing to do.

The bookstore is a vital, vibrant part of this community, a community that has changed dramatically over the past two decades. The neighborhood is in danger of becoming just like all the other neighborhoods in New York, beholden to those with deep pockets but sorely lacking the artistic and creative qualities that have made the East Village the most special of places, and that give it literary and artistic value. Surely Cooper Union--dedicated to the arts, architecture and humanities--can understand this. Surely, as an icon in schools promoting the importance of visual thinking, you can understand the power of symbols?

My father and I were dismayed to learn that you will not reduce the bookshop's rent by $5,000 a month during hard economic times. What does Cooper Union stand for? A school that does not charge tuition to its students--one of the best schools in the country in what used to be the most arts-friendly neighborhoods in the nation? Please stay true to your founding values and reduce the rent of this worthy bookstore.


As a novelist based in downtown Manhattan for thirty years I'm desperately worried by the idea that St. Mark's may be lost because of the high rent imposed by Cooper Union. Surely everything Cooper Union stands for would seem to insist that this unique bookstore must survive. I'm far from alone in saying that from my earliest years as a writer in New York I've largely educated myself by means of what I've found on St Mark's shelves: the classics and contemporary works I knew I needed, and a host of unusual and unexpected works I didn't know I needed, but which proved invaluable for my literary and intellectual development. St Mark's has been both a library and an informal meeting place for decades of my life as a writer here.

To allow St Mark's to die would be a serious blow to the cultural vitality of lower Manhattan. It is no ordinary bookstore, it is that increasingly rare thing, an independent that is perfectly attuned to the tastes and needs of the community it serves. It would be a careless act to let it go under, and it would be a source of real regret for all concerned in years to come. Its loss would be very badly felt. We would all suffer, and more deeply than would the institutional bottom line. This is a special case. Please, I beg you, allow St Mark's to continue to nourish one of the last truly creative communities in Manhattan.

In the 1930s, Cooper educated my immigrant great-uncle for free. He went on to create an award-winning invention that revolutionized allied military communications in World War II.

He was the first member of my family to go to college. Now a university professor myself, I am writing to ask Cooper to invest -- once again -- in something of unquestionable value to our world and for our future.

I understand that the cost of operating a university, particularly one of Cooper's famed generosity and caliber, in downtown New York is overwhelming.

However, in the case of St. Mark's -- which helps set and preserve the cultural tone of the Cooper area -- issues of value and cost need to be evaluated from higher perspectives.

The East Village doesn't need another sushi bar or boutique. It doesn't need to follow the fate of Soho and become a suburban mall.

It needs to maintain the high intellectual, cultural, and artistic standards for which it has so long been known -- the standards that draw top students, as they did my great-uncle, to Cooper and NYC: students who will later bring honor back upon Cooper through their contributions.

The loss of St. Mark's -- easily the finest curator and purveyor of intellectual, cultural, and art-and-design volumes in the US, matched only by a few counterparts in Germany and France -- would mean more than few thousand dollars in additional rent it would bring.

Please show the world that Cooper is dedicated to much more than easy profit by making an exception in this one important case and allowing St. Mark's to continue to operate.

Meanwhile, last night, Patrick Hedlund at DNAinfo reported that St. Mark’s Bookshop isn’t any closer to having its rent reduced by Cooper Union after a meeting with school officials. Cooper Union offered a deferral of one month’s rent, co-owner Bob Contant said.

“They claim they’re broke and they can’t afford it financially,” said Contant, noting that the school offered the shop a chance to postpone paying a month’s rent to another time over the course of the next seven years left on the lease.

Owners Bob Contant and Terry McCoy found out their bid for a $5,000 rent cut was nixed by landlord Cooper Union in a meeting with T.C. Westcott, a vice president for finance and administration at the arts and engineering school.

"They don't feel they can do anything in terms of the rent," McCoy said. "She started out by telling us that Cooper is really losing a lot of money."

Contant and McCoy meet with Coop President Jamshed Bharucha tomorrow.
Posted by Grieve at 6:59 AM

Hey Cooper needs to build new buildings! Too bad about the neighborhood, but hey, they aren't a nonprofit. Oh, wait, they are but, they don't answer to the community.

Everyone go buy a book.

Maybe its wrong of me to criticize such heartfelt submissions but could that really be Salman Rushdie's? It sounds so trite and ham handed. sorry.

Losing money by financing new construction, NOT by charging a reasonable sustainable rent to a beloved book store....fucking liars!!

St. Mark's Bookstore entered the lease agreement KNOWING how much the rent was! Apparently it was reasonable to the owners when they signed the papers.

ARE YOU F*CKING KIDDING ME!!!
this is a SAD, SAD day for NYC and those b@st@rds should be ashamed of themselves.
How do these people sleep with themselves at night!! i'd really like to know!!!!

It's up to us now, folks. Let's keep supporting SMBs with cash. The holidays are coming; I am buying all my gifts at SMBs and encourage others to do the same.

I do sympathize with the situation that St. Marks books is in, but it is also my understanding that Cooper uses some of the rent they charge to subsidize the tuition for the college. They are one of the only institutions that a student pays no tuition. compare that to universities today that charge upwards of 60K or more per year. Why not have a fundraiser for the book store to reach a 60K goal, which would be the total savings of the rent reduction.