Toasties is toast on Union Square 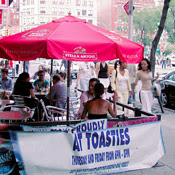 NYU Local reports this morning that Toasties, a favorite food-beverage stop among the construction worker and hungover NYU student set, has closed. The Marshal has seized the always-serviceable deli with sidewalk cafe on Union Square West near 15th Street. Apparently they haven't been making the rent with their landlord, NYU.

"Toasties now owes NYU the equivalent of about 8 months of back rent, some $200,000. Over the course of the last three years, we have met with the owners several times, made significant efforts at being accommodating, and worked out a series of payment plans; each time, the owner agreed to the plans and ultimately failed to live up them."

Suck it NYU. Suck it and die.

What pigs NYU are.

Um, you can play the NYU is evil card b/c only NYU would charge a deli 25000 dollars a month!!

I'm not gonna blame NYU here either. Toasties is overpriced for what they offer, and was always busy. If they can't make rent on that, they're not doing business right.

toasties were making 'dough' hand over fist and most of it for cash. they paid their poor migrant mexican and polish workers squat and worked them 14 hours/day. Their food was disgusting, always good for a case of the runs. In short they were criminals and they are laughing at us all from their glam condos in Mianmi beach.

yo i used to work there. good thing they paid cash. $8/hour. undertable. at one point they would backup all our money by a week after someone fucked up selling beer to a minor and they got a huge fine. they always took all our tips from the tipbucket. and they were so broke they never even gave us toasties shirts and hats to wear. cheap fucking immigrant FOB place. at least we got free food. and i gave mad shit and discounts away to people. customer service was SHIT too. **you forgot to mention asian workers.

From what I've heard, the owner, Hilda Chang, screwed everybody over, NYU, vendors, IRS, her partners and investors etc., and pocketed all the money for herself like a crook.