Dinner at the East Village IHOP 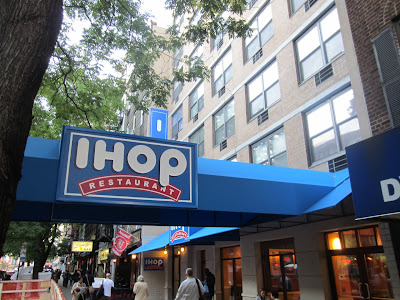 We've talked enough about the outside of the new IHOP on East 14th Street. So it only seemed fair to go inside the place. We waited several weeks after the grand opening to allow the kitchen time to work out any kinks. Or something.

After my incredibly popular review of the new lesbian Phoenix, Grieve put me on desk duty. [Editor's note: I did?] Only recently has he decided to wean me back onto the Internet with such high-brow assignments as reviewing new ATMs, public storage units, and the much talked about IHOP on 14th Street.

Knowing that self-induced, explosive diarrhea is more fun with a partner, I begged Marty to join me on this trip into suburban enemy territory. We met at the Blarney Cove and, after a few cocktails with a peg-legged mute named Muttly, we were off.

The new IHOP has all the ambiance of a check cashing joint on 23rd Street. If they ever hope to succeed in making this place a “late night destination for hipsters” their PR people dream of, the first thing they need to do is adjust the stadium lighting. On top of the overall retinal bleaching, each booth has its own interrogation light bulb dangling between you and your dining companion. 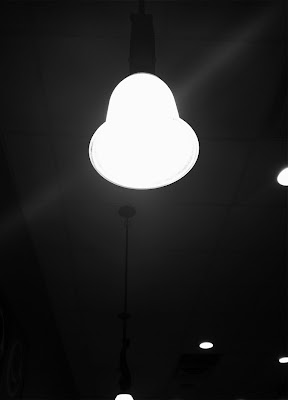 It was so bright I could see the back of Marty’s eyes. If you pop in here for a bite to eat after some late night drinking but before some late night fucking, forget it. All bets are off. Nobody looks good in here.

The menu is a West Virginian’s dream come true that includes Country Fried Steak, Thick-Cut Bone-In Ham Dinner, and a wide variety of burgers all of which come with bacon. Lots of bacon. The only saving grace to this health care crisis menu is the calorie count listed next to each item so the choice of how fast or slow you’d like to die from coronary disease is all yours. Onion rings are a mere 1,250 calories BTW.

We started with an order Monster Mozza Sticks which came so lukewarm the cheese was like white tar. 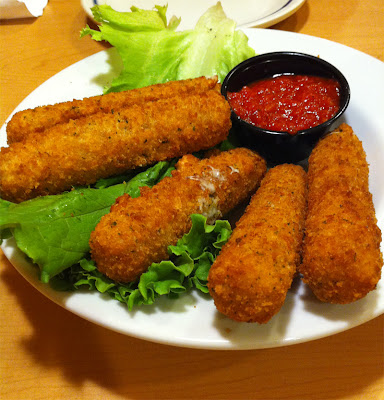 I ordered the Philly Cheese Steak AKA Steak-Ums on a buttered mini sub roll with onion rings. Opting for the slow death, I ate only two of the onion rings. After getting management’s permission to order from the kids menu, Marty treated himself to a large pancake that came with all the fixings to draw a face on it – strawberries, bananas, whipped cream and yogurt in a tube. His meal was far more engaging than my butter soaked white trash delicacy. 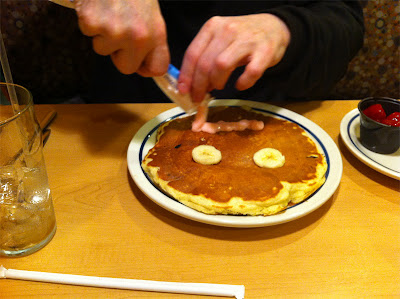 The one thing this place has going for it is they have the most courteous staff I have experienced in a casual dining spot of this caliber. Our waitress, April, was incredibly friendly. She entertained our numerous questions about the stupid menu, didn’t yell at me for taking random photos of the syrup, and was kind enough to ask the management if we could order from the kids menu. She checked in on us several times and we tipped her generously for putting up with our shenanigans.

But look! On the way home we ran into Lady Gaga! 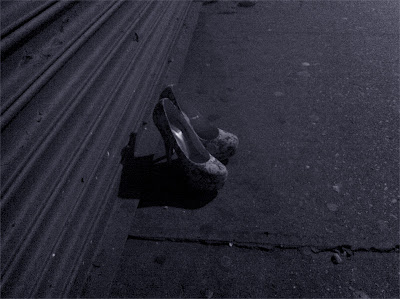 Marty wrote about the experience here.
Posted by Grieve at 7:00 AM

It sounds as if you ordered badly. Choosing a steak sandwich at IHOP is like ordering the broiled calves liver with Marsala cream sauce at a 24 hour coffee shop-- a doomed exercise for which the victim is entirely to blame.

Sounds awful--what did Gumby think of IHOP???BTW--I love the shoes.

No one in the know goes to IHOP for dinner. It's all about the breakfast and those pancakes!!!!!!!

Lux's review is spot on, great job, it captured the night perfectly!

ew! i can;t believe u ate there.

I bet this IHOP is run by lesbians and that's why your food was so bad.

A meal that interspersed flights of fancy like the “Monster Mozza Sticks" — in which the mozzarella appears in delicately fried, ready-to-chew tubes — with a "Philly Cheese Steak" and "Large Pancakes With All the Fixin's" might have seemed overly coy or precious simply because they appeared at the table in a series that demanded your unalloyed attention! Surely you and Marty caught glimmers of "nouvelle vague" gastronomy in IHOPs cheeky glance backward toward culinary tradition!

reminds me of the time in college my buddy ordered a t-bone steak at Denny's. suffice to say the night didn't end well for him

Get off your high horse and order another $4 cup of coffee.

Great post Lux.
“And then there were the bathrooms. Single occupancy for men. Single occupancy for women.”
This design is done for the safety of the customers. If the bathrooms were not solitary, the sonic boom type noise due to the extreme diarrhea plus the stink warfare impact (WMD indeed) would wipe out additional customers as well. As they say in the military, keep collateral damage to the minimum.

The solo bathrooms are there so you can spike in privacy, dummy !

Lux and Marty are the celebrity spotters of the week.

I didn't even know you could order dinner there.

I had to try it before knocking it and must say the pancakes were good. The rest of the breakfast food...meh. IHOP will draw its own crowd and I don't think that will hurt any of the existing favorite diners.

love it, lux & marty.
i am sure there is absolutely nothing non-toxic on ihop's menu.
places like this and the companies they fuel do nothing but destroy the planet and torture animals.
not to mention neighborhood culture.

I purposely ordered one of the grosser things on the menu because I thought getting eggs would be a cop out.

Totally agreed on the staff. I haven't been treated so nicely in a long time. Maybe it's because they're still (sorta) new. I hope it doesn't wear off.

Or maybe it's because they're a little ashamed to come in and work for the corporate greedholders of America. They know we hate them for taking even one lot in this town.

I dare Lux to eat or drink something unnaturally blue from the 7-11. Maybe shoot a photo of your tongue afterward.

Glad the staff is nice. However, if you lived in one of the apartments behind this hellhole, you'd be praying for the day when the "Going Out Of Business" signs go up. The noise from the equipment never, never stops, and the smell! The SMELL!!!! My apartment stinks like a cheap hotel kitchen after the breakfast rush now. If you own an apartment in one of the neighborhoods slated to get their very own IHop (I'm looking at you, Limelight neighbors), sell now. Because once the doors open on the new grease palace, you'll be trapped. No one will buy your place once they see, hear and smell what's going on.

Last night was the second time I had to call the cops to stop violence that erupted at this place – at 4:30am.. (And I am not talking a little yelling but groups of people – at least a dozen to 20 on each side – threatening each other. I was waiting for gunshot.) The first time, a group of 6 or 7 men beat up one guy – kicking at him while he writhed on the sidewalk. East Villagers, PLEASE let’s get this disgusting place out of our neighborhood!