Who says that the East Village is no longer a bohemian mecca? 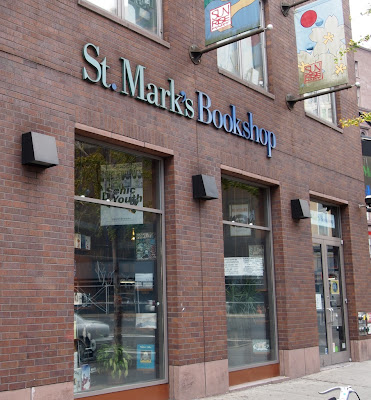 [Co-owner Bob] Contant acknowledged that the East Village was no longer the bohemian mecca where he and four partners ... had chosen to open their business, in a 600-square-foot storefront at 13 St. Mark’s Place that rented for $375. At the time, Mr. Conant’s apartment was $63 a month. When he moved a few years later to nicer digs with a fireplace, his rent soared to $120.

Anytime Feast for 1: Individually assault a 90 min barrage of all the under-$7 craft brews you can slug from an ever-rotating tap selection, plus unlimited grub in the form of 5 types of sliders, or mac ‘n cheese flecked with bacon, sausage, beef, or vegetables, just like you'll be after such a heart-stopping meal.

Game Day Party for 4: Normally $184, you and 3 amigos will crush 90 min of your choice of drafts plus endless buffalo wings & fries, kicked off with a plate of Tavern’s lip-smacking pulled pork, Philly cheese, and beef sliders.

BTW, this is illegal, but there seems to be a loophole in the law that everyone is exploiting...

"The ABC Law prohibits from selling, serving, delivering or offering to patrons an unlimited number of drinks during any set period of time for a fixed price. The law also requires that licensees prohibit party organizers, promoters, etc., from engaging in this conduct in the licensees’ establishment. The statute also prohibits licensees from creating drink specials which, in the judgment of the Authority, are attempts to circumvent the law. This includes offerings of free drinks, or multiple drinks for free or for the price of a single drink, or for a low initial price followed by a price increment per hour or other period of time. The SLA does allow 2 for 1, half price and other such specials where the price of a drink is not lower than one-half of the premise's normal or regular price for the same drink. Section 117-a does not apply to private functions not opened to the public, such as weddings, banquets, or receptions, or other similar functions or to a package of food and beverages where the service of alcoholic beverages is incidental to the event or function. If you have questions about whether a particular drink special would be a violation of Section 117-a, or whether a particular event is exempt from the statute, please contact the Authority’s Office of Counsel."

When food servings are measured out by elapsed time, you know things have gotten bad. The sensible humans are now officially outnumbered around here.

"plus unlimited grub in the form of 5 types of sliders, or mac ‘n cheese flecked with bacon, sausage, beef, or vegetables..."
Well, that sounds very tasty and quite a...wait, did they say vegetables?! WHAT KIND OF HELLHOLE IS THIS PLACE??? AAAIIIIIEEEEE!!!

yuck.
i won't even walk in front of this place, let alone into it.
a repugnant piece of middle america polluting avenue c.

This Applebees crap is so depressing. It could only be moreso if that blurb came from UrbanDaddy and not Thrillist. I came to the EV to get away from such suburban asshattery. Fat, bacon-greasy drunk-ass football (it is football, right?) fans are of my nightmares. At least they’ll die early of heart disease, but why are they *here*?

Longtime reader and commenter finally giving myself a name so Jeremiah and John Penley won't yell at me for being anon (j/k, love you guys).

yay LvV--now i have a mental picture of you that will persist. much better.

Thanks J-moz! and I promise not to call you that again. :)

All past abnormally pro-falafel anon comments at EVGrieve were probably made by me. I do not understand people who eat crap like the above when they are literally surrounded by every cuisine on earth and amazing produce out the yin-yang.

Come on LvV, aren't you even a LITTLE nostalgic for those bud lite and microwaved chicken wing specials out in strip mall hell?

7:41, haha, of course sometimes I crave a diet Coke BigGulp. But if I can't have it while driving my car down Route 18 listening to WHTG Modern Rock at the Jersey Shore with Matt Pinfield, what's the point? You can't go home again. I came to the EV long ago for a reason and that reason was not to be around buffalo-wing-eating football dickheads.