[Updated] Melee this morning at 7A 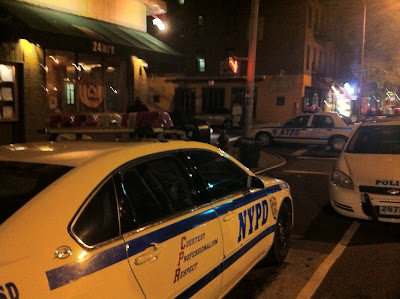 From Dave on 7th this morning on Seventh Street and Avenue A: "I just witnessed the most violent act ever. Four or six people busting up 7A. A woman screaming. It was frightening. Four long minutes later, the police arrived."

We'll have more info as it becomes available later in the day.

[Updated]
I asked Dave on 7th for more details. He was rushing to work at the time he saw the fight. Just after 6 a.m. ... He's standing on the corner of Avenue A and Seventh Street. He hears a woman scream. He turns around to see a man inside the back of 7A beating an unseen person on the floor. Then a whole scrum seems to appear.

Meanwhile, the woman continues to scream. Dave calls 911. While on the phone, a man walks out 7A's side door and starts heading up Seventh Street. He stops, and comes back. He picks up one of the sidewalk tables and throws it through one of 7A's windows on Seventh Street.

Before the police arrive, the man who was punching someone emerges from inside and hops into a waiting vehicle. (Dave gave the description to the police.) The vehicle pauses for several moments and leaves the scene right when the NYPD arrive.

Roughly four or five minutes pass from the time of the 911 call to the NYPD's arrival. "I can tell you it was bad enough to chase some of the staff out to the street."

Dave on 7th stopped by late this afternoon. The hostess on duty claimed NOT to know about the incident. Someone had replaced the window.
Posted by Grieve at 7:26 AM

Email ThisBlogThis!Share to TwitterShare to FacebookShare to Pinterest
Labels: 7A, fights

My neighbor saw it, too. Sounds really awful. Between this and that horrible rape on the street on 10th (maybe?) btw B and C, it's really making the usual lovely mornings a shitty and scary time. Be safe everyone. and I hope this person was okay.

Yeah - so what did happen?

Can't find anything about it anywhere online but EV Grieve. What went on, Grieve?

Who said the east village was getting too sterile? Maybe 7A should contact iHop and get their security/bouncer info.

souds either like a lover's quarrel or some one didnt pay up.

"The hostess on duty claimed to know about anything what happened that morning."

Forgot the all-important NOT part. I recast the sentence to make it clearer. I think!

Yeah, looks like someone didn't pay what they owed...